Posh boss casually admits he has never been to the North

A PUBLIC-SCHOOL educated boss has casually admitted that in his 43 years he has never visited the North of Britain.

Julian Cook, who lives in London, joined an office conversation about York and said that even though it was in the North, his friend Tamzin had told him it was actually of significant  architectural interest.

Colleague Mary Fisher said: “Then he said, ‘Of course I’ve never been further than Rugby. I once considered Old Trafford for an Ashes game but I’ve heard things about the women.’

“We discussed the fact that – since I started here – he’s been to Bahrain, Italy, Uruguay, Kenya twice, Hong Kong and the US but never to a large region of his own country, and he replied ‘I honestly didn’t know there was anything there to see.’

“Then he said, ‘Are all the houses in those rows, or are there proper ones as well? And I do prefer green countryside. I’d miss that up there. I think it’s the better type of countryside to have.’

“He wouldn’t commit to an actual visit, no matter how highly we sung its praises. He seems to suspect we’re trying to trick him.”

Cook said: “They are oddly convinced of its merits. Perhaps when I’m flying up to Scotland for the grouse shoot in May, I’ll take a little look out of the window.”

Arsehole has strange need to outdo whatever you've just said 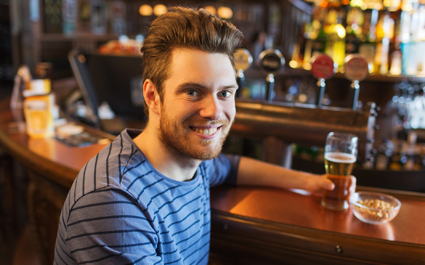 A MAN cannot listen to a harmless anecdote or mildly amusing comment without trying to do better, it has been confirmed.

Julian Cook constantly tries to have the last word in everyday conversations for no obvious reason other than being a petty little git.

Co-worker Nikki Hollis said: “I was telling people about a crap pub meal I’d had, so naturally Julian had to mention the time he was served raw chicken that ‘could have killed him’.

“I don’t get it. What sort of pathetic, over-competitive arse tries to outdo someone over a mildly diverting story about some cold chips?

“Another time Lucy got completely soaked in the rain and our colleague Dave said, ‘I think a few drops might have landed on you, Luce.’ Everyone laughed but I could see Julian desperately trying to think of something funnier.

“After several minutes all he could think of was ‘Is it raining slightly, Lucy?’, which was too late and really just what Dave said anyway. Christ he’s a pathetic little shit.”

Cook said: “I think my colleagues appreciate it when I liven up a dull conversation about Emma’s holiday at Pontins by mentioning the time I visited the Great Pyramid in Egypt.

“I was going to entertain them with my conversational skills at lunch but they seem to have gone without me and forgotten to leave a note.”