EDUCATION secretary Ed Balls has called on primary schools to allocate places to baby chickens in a bid to improve results.

As recent research showed that week-old poultry have a better grasp of arithmetic than 75% of Britain's eight year-olds, Mr Balls said it was time to give tiny chicks full access to the state education system.

He said: "We must never forget the most important part of our education system is the targets I set based on the next Labour manifesto.

"If tiny chicks do the job then great, but I'm happy to use pigs, lizards, stoats, it doesn't matter as long as the fuckers can count to three."

Mr Balls added: "Chick enrolment will also reduce the cost of new school buildings as, by my reckoning, we can cram at least 800 of them into a filing cabinet.

"And it means we could sell off the rest of the playing fields, given that baby chickens have little or no interest in PE."

A pilot scheme will be launched after the Easter break when more than 4000 hatchlings will be delivered to Crays Hill primary school in Essex in a bid to push them up the league table.

The local education authority hopes the birds will help to deliver a 'B' grade average for the school, but if not they can always be gassed, plucked and deep fried in bread crumbs.

I Take My Coffee Black - Like My Women, Says Queen 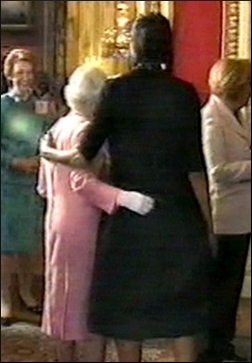 BUCKINGHAM Palace has ended months of speculation after announcing that the Queen is gay with a fondness for tall, powerful black women.

The announcement  came just hours after Her Majesty was pictured resting her hand a few inches above the buttocks of US First Lady Michelle Obama.

A spokesman said: "After careful consideration and following consultation with the prime minister and the leaders of the Commonwealth, Her Majesty Queen Elizabeth II has confirmed that she is totally gay, especially for statuesque black ladies."

Royal observers had expected the Queen to make a move on the wife of a foreign head of state at some point this year with French first lady Carla Bruni the clear favourite.

Constitutional expert Denys Finch-Hatton said: "Everyone knows the story about the pillow fight with Imelda Marcos after a state banquet in 1974, but the Palace always dismissed it as nothing more than playful hi-jinx."

He added: "It shouldn't affect Her Majesty's constitutional position in any way, as long as she doesn't want to divorce Prince Philip and marry a nun."

The White House stressed that Mrs Obama was flattered by the Queen's attention but that she did not like her in that way.

A spokesman said: "The First Lady was just being friendly and is sorry if she gave out the wrong signals. Nevertheless we wish Her Majesty well in her search for a broad-shouldered black Amazon who can finally let her express all those things that she's bottled up inside for so long."

Meanwhile Prince Philip is understood to be fascinated with his wife's new sexual orientation but has urged her to steer clear of inscrutable Chinese lesbians.