Punters Pay Thousands To Throw Bishop From A Plane

CHARITIES are looking forward to a cash bonanza today as people all over Britain pay to throw a bishop out of a plane.

Each of the Church of England's 108 bishops and two archbishops will be flown to a height of around 6000ft before being hurled from the plane by the highest bidders.

John Sentamu, the Archbishop of York, will be thrown out over the ancient cathedral city by Roy Hobbs, a plumbing contractor from Harrogate.

Mr Hobbs said: "I paid £7000. It seems like a lot, but memories are priceless. And I get to tell my grandkids I once threw an archbishop out of a plane."

Bristol-based architect Julian Cook, who paid £5000 to eject his local bishop, said: "I intend to start an argument with him about the existence of God and then just push him out when he starts annoying me."

Organiser Margaret Gerving said: "It's going to be great fun. We've got lots of people dressing up as Satan and even a few dressed as Charles Darwin.

"And of course the bishops will be in their full regalia, so it'll look quite spectacular as they near the ground."

Celebrated biologist Richard Dawkins will launch the event by wishing everyone good luck before hurling the Bishop of Oxford into the void.

Meanwhile each diocese has organised teams of volunteers who will try to catch their bishop in a big blanket. 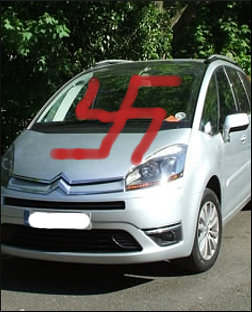 LABOUR will today unveil a detailed plan to alienate its last remaining pockets of support.

The central plank of the party's strategy involves identifying the 10 most popular family cars in Britain and then making them a nightmare to own.

A Labour spokesman said: "We're going for the double whammy of making them too expensive to drive, but also impossible to sell.

"And if that doesn't work we'll just spray paint a big swastika onto the bonnet."

The party is also drawing up plans to spend £200 million of taxpayers' money on a vicious PR campaign against the country's 100 most decorated war veterans.

Meanwhile teams of party researchers will tour marginal constituencies, identifying Labour voters and then kneeing them in the groin or setting fire to their coat.

And later this week, in a carefully stage-managed event at Westminster, at least 10 Cabinet ministers will explain why they intend to vote Conservative.

The spokesman added: "We'll take stock during the summer and if, at that point, there are any Labour voters left, the prime minister will send them each a personal, hand-written letter calling them a c*nt."