Robbie Orders Britain: Strip Down To Your Undies

BRITIAN will arrive at work this morning dressed in nothing but its underpants, following the latest decree from Robbie Williams.

His Magnificence issued the command yesterday morning after he became momentarily bored while taking a bath.

His official spokesman said the underpants rule is in place until further notice, although shoes and umbrellas will be allowed in the event of bad weather.

He added: "Robbie would really like to see some thongs, some novelty pants and some great big nappies, so let's not disappoint him."

With Robbie now controlling every aspect of British society, opinion is divided between those who think this a great thing and those who think it is an absolutely brilliant thing.

Citizens are already looking forward to driving on the right on Mondays, Wednesdays and Fridays, while plumbers are working overtime after Robbie ordered hot water to come out of the cold taps and vice versa.

There has also been universal praise for Robbie's introduction of 40ft high screens on every street corner showing Ant and Dec's Saturday Night Takeaway 24 hours a day.

Meanwhile all citizens now have Boomer, the Port Vale FC mascot, tattooed onto their left buttock. Anyone who tries to remove the tattoo will be dealt with in the usual way by being taken to Robbie's castle and fired from a giant cannon.

Prime minister Gordon Brown said: "It's important that Robbie is able to express himself in this way.

"He's a special boy and the last thing we want is for him to get all depressed and fat again."

Atheists Are Nice People Who Will Roast In Hell, Says Cardinal 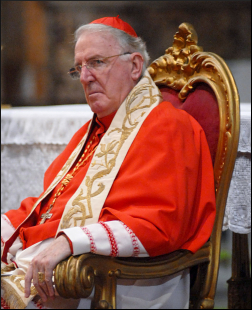 ATHEISTS and agnostics are decent people whose tormented souls will burn for all eternity in the scorching fires of hell, Britain's biggest catholic said last night.

Cardinal Cormac Murphy O'Connor said non-believers should be respected, right up to the point of death when they will finally come face to face with Satan and his blood-soaked pitchfork.

He told a conference in London: "Those without faith should not be shunned or abused. Jesus and Beelzebub are already cooking something up for them, don't you worry about that."

The leader of Roman Catholics in England and Wales stressed that a 'hidden God' was active in everyone's life, often nipping to the shops for them or wiping down their kitchen surfaces.

Stressing that God was not in the phonebook, the Cardinal said: "You can't just ring him up. You have to get an appointment and that can take up to 18 months.

He admitted talking about God was difficult, especially as some people genuinely believe a man was born of a virgin, performed miracles and then died and came back to life, while others believe that is a lot of insane, voodoo rubbish.

He added: "We must not allow Britain to become devoid of religious faith, otherwise how will I afford new hats?"

The Cardinal's lecture follows clashes over stem cell research and gay rights, where the church tried to impose laws based on a 2000 year-old book written by people who stoned each other to death for wearing the wrong clothes.