THOUSANDS of young women wearing large-framed glasses are not actually repressed nymphomaniacs, it has been revealed.

The latest fashion for big spectacles with black rims had raised hopes Britain was entering the phase of naughty fun promised by all pornography since a 1613 woodcut of Ipswich library showed the Earl of Suffolk being chastised for the late return of a Gutenberg bible.

But saucy romp investigator Stephen Malley said: “One woman I was following slowly took off her specs and shook her hair loose and all that happened was I got a bit of dandruff on my shirt.

“I was so disappointed I barely had the energy to put my trousers back on.

“It was nothing like I’d been assured it would be in Overdue Lesbos. When questioned, the woman admitted she just wanted to look a bit like Zooey Deschanel, whoever the fuck that is.

“As a last resort I asked her how the Dewey Decimal system would classify this and I am now banned from Carlisle Central Library.”

Malley estimates that less than one in a thousand geeky-but-attractive looking women could actually name every crew member of Deep Space Nine and reckons they just like the way they look in a cardigan.

Malley became a leader in his field after proving that wearing an air hostess uniform generally signified being employed by an airline rather than having a penchant for a four-way Reverse Dutch Steamboat.

He added: “I still wish my life resembled the scenarios portrayed in my magazines, videos and DVDs, except for when I need some sort of household repair doing, which I imagine would actually be a bit of a nightmare.”

Revolution based on film based on comic 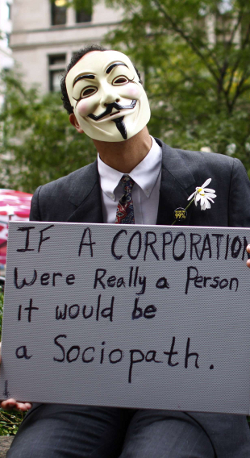 THE growing citizens’ revolution across the western world is based on a Natalie Portman film that is based on a comic, it has emerged.

Experts say the ‘Occupy’ protests in New York and London seem to be inspired by V for Vendetta and not an awful lot else.

Professor Henry Brubaker, of the Institute for Studies, said: “Shortly after the film version was released I published a research paper entitled Plastic Masks as a Substitute for Knowing What You’re Talking About.

“In it I demonstrated how the film would inspire millions of people to want to take part in a random protest while wearing a Guy Fawkes mask.

“Indeed, it would not surprise me if all these protestors went mental on their credit cards and voted for high-spending politicians in a deliberate bid to collapse the system, just so they could all get together and wear these masks.

“The world is an increasingly complex place, so when trying to understand it I always go back to the first principles of human behaviour and ask myself ‘is someone trying to look cool?’.”

Professor Brubaker stressed that if the film and comic based revolution somehow succeeds then eventually everyone will be wearing a Guy Fawkes mask and anyone who is not will be persecuted until one day a brave, lonely hero stands in front of something symbolic while wearing a Ronald Reagan mask.

He said: “Also V for Vendetta imagines a country run by an evil dictatorship which sends its opponents to horrific medical experimentation camps. While disposable incomes are at 2003 levels, I don’t think that means someone is about to inject you with anthrax.”