SIMPLY throwing all Christmas cards into the bin unopened could save you up to four hours this Christmas, it has been claimed.

Time-saving expert Martin Bishop believes a million hours of festive fun could be gained nationally by putting cards straight in the recycling after squeezing them for possible money.

He said: “I hate to say ‘one weird trick’ but you take those cards and stick them in the shredder, like Santa does with the kids’ lists, and you’ll feel a real weight off your shoulders.

“Think of the time you’ll save buggering about opening them and putting them on a shelf.”

Bishop added: “You really don’t need to read Christmas cards, unless you especially like generic poems about robins and bells with a token greeting scribbled underneath. The ones hand-made by children or pensioners are especially poor.

“Although interestingly I did once get a card from my nan that had a racist drawing in it.” 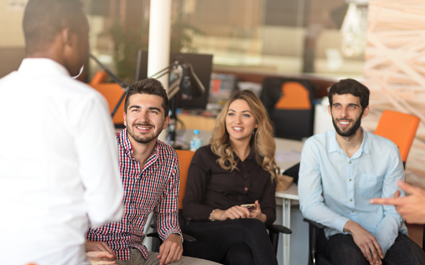 A GATHERING of workers to generate business ideas only produced dark and twisted visions, it has emerged.

Attendees were supposed to be coming up with ways of generating new clients, but account manager Wayne Hayes could only envision a huge Mongolian Death Worm rising from the floor and swallowing them all, then being digested alive for eternity.

Hayes said: “My manager said ‘interesting, let’s unpack that idea’ but I could tell he was freaked out.

“In my head I started summoning the tormented souls of dead office workers who were made to endure ‘thought showers’ in the past.

“It may have worked because suddenly Debbie from marketing’s eyes rolled into the back of her skull and she said ‘it’s a no-brainer’ in this terrifying strangled voice.”

Meanwhile colleague Mary Fisher’s mind drifted to the possibility that every time the manager said ‘let’s run that up the flagpole’ his head would spin round spewing toxic Cappuccino fluid over everyone.

Fisher added: “A selection of donuts were laid on to help ‘inspire creativity’ but they may have just spawned a new generation of serial killers.”