EVEN the hardest of parents are developing a blank gaze during the latter stages of the school holidays, it has emerged.

As the enforced period of time spent with their children drags on into its fifth weary week, battle-scarred parents are reporting symptoms that include tremors and a lack of responsiveness to external stimuli.

Mother-of-two Nikki Hollis said: “I went into the school holidays with a gung-ho attitude, because I came through Easter a little bloody, but mainly unbowed.

“However, I think I must have blocked out the experience of last year’s summer break, perhaps due to the trauma involved, because I have felt completely unprepared for the seemingly endless brutality of the last few weeks.

“We’ve had the Battle of Can We Go To Legoland?, the Siege of the Naughty Step and the Tantrums in the Middle of Tesco Campaign. It’s true what they say about war being boredom punctuated by moments of terror.

“Both my husband and I have been tempted to desert our posts, but we’re ultimately loyal and have developed a strong sense of camaraderie with all the other troops that we meet in the trenches. And by trenches, I mean the local playground.”

Hollis added: “Once more unto the breach, dear friends, once more.”

Doctor Who fans furious to discover it is load of bollocks 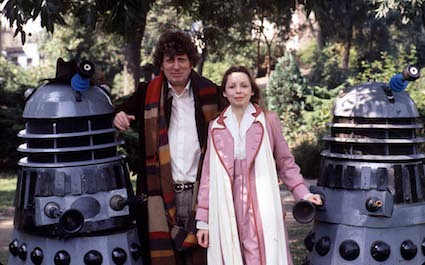 ANGRY Doctor Who fans have condemned the programme after realising it is total bollocks.

‘Whovian’ Roy Hobbs attacked producers after realised the series is about a shape-changing alien that lives in a phone box.

Hobbs said: “It’s taken me 32 years to realise this programme is the biggest load of bollocks going.

“The basic idea is fucking ridiculous, the Daleks look like ice cream cones, none of it makes any sense.

“I blame the BBC for not pointing this out earlier. Had they done so I could have saved a fortune on conventions and ‘limited edition collector’s item’ cyberman toys. And they are toys, not scale models as I was led to believe.

“Also I could probably have experienced sexual intercourse.”