Seats on the bus from worst to best

Up front near the driver

Not only are you at risk of an old person squeezing in your seat and telling you their deeply-prejudiced views on Strictly, you’re exposed to every draught from the opening doors. And the driver might have a companion who stands up front chatting and gives you dirty looks like you’re trying to get in on their good time.

Three-quarters back on the lower deck

Everyone gets on, hurries past the freaks at the front, and goes further back to see if there’s a double seat free. But because everyone does that there never is so you’re either sitting next to some bus wanker or they’re sitting next to you.

Back of the lower deck

The turntable bit on a bendy bus

Not only are there single seats eliminating any danger of sharing personal space, but the front of the bus moves and you don’t or the back of the bus does and you don’t. Which is basically like magic and you’re the wizard.

Back of the top deck

The seat furthest away from the driver so the most rebellious, but the teens can’t be bothered to trekking up here when there’s more people to insult down below. Position yourself in the middle with your arms outstretched and feel like a king. However spilled liquids will make their way towards your bag.

Front of the top deck above the driver

Hands down the winner, this seat that allows you to pretend you’re flying down a hill, hovering through an urban landscape, see into the bedrooms of passing houses and find out what’s on the top of bus stops. You’re like unto a God. 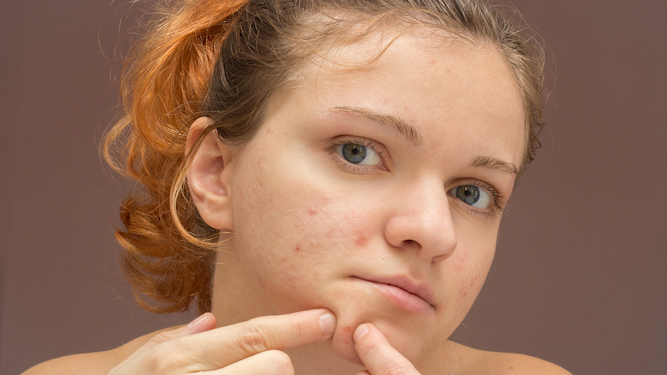 A WOMAN who eats complete shit all the time is baffled as to why her skin is in such a state.

Sophie Rodriguez is flummoxed by her constant breakouts and blocked pores, despite eating 35 bags of crisps for every piece of fruit and actively pursuing an unhealthy lifestyle.

The 32-year-old said: “I thought spots were meant to be a teenage thing. But I nip in the loo at KFC and yep, there’s another one.

“Yes, I’ve had takeaway the last six nights with little to no nutrients and I make sure to drink barely any water. And every weekend I binge drink and smoke 20 fags. But apart from that I live a healthy lifestyle. I walk to the pub.

“Still my skin is basically an oil slick. I’ve tried everything – cleanser, micellar water, cucumber peel masks from Superdrug – apart from making better dietary choices and it makes no difference. It just doesn’t add up.

“I think all I can do at this point is accept that it must just be genetic and there is nothing, absolutely nothing, I can do to help myself.”

Boyfriend James Bates said: “I’ve suggested she eat vegetables or drink something that isn’t coffee, Diet Coke or vodka, but she looks at me like I’ve just slapped her and tells me to piss off. I’m not getting involved.”