Six ways to let the nation down this weekend

TO you it may just be a four-day bender, but to loyal Britons it’s a magnificent celebration of our beloved monarch. So how will you be letting the kingdom down over the Jubilee weekend?

Only a turncoat would leave Britain over the weekend, so it’s good that leaving our borders is currently a more challenging version of Takeshi’s Castle. Flight cancelled on the runway? Serves you right for turning your back on your own country to go somewhere that probably doesn’t even have a proper queen, back-stabber.

Improvising your own pissed-up toast

Every street party will be raising a glass with a simple ‘God save the Queen’. Don’t stand unsteadily and disrespectfully offer: ‘No listen, seriously, good luck to her. Born into it, they all are, but so what? F**king amazing job. And she was pretty fit back in the day. What? Sorry. Cheers Liz, cheers everyone.’

You gave the national anthem a good go but now your local pub is insisting on the full version of ‘Rule Britannia’. Reading the lyrics from your phone you’re sure ‘More dreadful from each foreign stroke’ sounds a bit Brexity, and it seems to be in favour of other people being slaves. You should be rightly barred for five years.

Vomiting on the Jubilee Line

You were ordered to take your weird cousin to London to watch the pageant on The Mall, but started on the cans at Macclesfield, got lost at Green Park, and ended up barfing M&S gin and tonic and Speckled Hen all over the most sacred of Underground lines. Pray Her Majesty never finds out you soiled yourself at Victoria.

Not despising Harry and Meghan

You should hate them anyway for general treachery to the Royal Family, but this is the Queen’s weekend, not theirs. They should f**k off home as soon as possible without getting backstage video footage to sell to Netflix. If you say something sickeningly disloyal like ‘He’s probably very happy for his gran’ you have made an enemy of the British people and must now avoid normal society and live in a cave eating beetles.

As the world pays its respects it is only natural to show your adulation of the Queen and her family. But don’t be Alan Titchmarsh. There’s a big difference between proud, patriotic admiration and being a slobbering, bootlicking toerag. Take heed, Titchmarsh.

How to pace your four-day piss up for the Queen 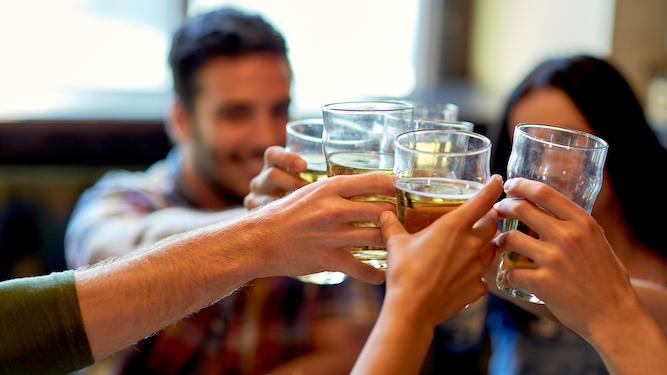 IT is your patriotic duty to get royally pissed for Her Majesty this Jubilee weekend. But make sure you pace yourself properly with these tips.

The Jubilee weekend is a marathon of inebriation, not a sprint. Amateurs will have started getting pissed on Wednesday night, but seasoned pros will take things slow on Thursday morning with a couple of half pints before lunch. This might not seem impressive to onlookers, but try to think of them as alcoholic callisthenics. They’re needed to prepare your body for the carnage to come.

The mantra ‘eating’s cheating’ is certainly true on a night out when you’re trying to get hammered as quickly as possible. But on a four-day weekend you need to put food into your face to survive. Don’t worry about its nutritional value, any burger or kebab will do, just so long as it takes the edge off.

Keep mixing to a minimum

Choose your lane this morning and stick to it. Don’t try to change from beer to wine or spirits after a couple of days because you’ve got bored, the uncontrollable physical consequences will not be worth it. Also you don’t want to let the Queen down by passing out in a puddle of your own puke before Sunday.

Don’t be afraid to drink water

A couple of pints of water in the evening will help to clear your system and prepare you for the next day of heavy drinking. Try to wait until you’re home to pour yourself a glass though, because asking for council pop in a pub is a risky move on normal weekends. This weekend it’ll probably get you thrown through a window.

Try to get some sleep

The Jubilee weekend is 96 hours long, so there’s no way you can stay conscious for all of it. Don’t feel that you have to stick to your usual sleeping routine though. Public gardens and bus shelters are perfectly good places to pass out for a couple of hours before heading back to the pub.