DID you once savage your classmates with your astounding repartee? Then you no doubt used these zingers back in the day:

Takes one to know one

Like a young Stephen Fry, your scintillating wit was the envy of everyone around you. It took an impressive amount of mental nimbleness to respond to someone calling you a dickhead by angrily mumbling ‘Takes one to know one’ instead of coming up with an actual insult.

The nuclear option for any schoolchild of the 1980s. If you found yourself being insulted and backed into a corner, your adversary better brace themselves for a searingly original rebuke. Oscar Wilde would certainly have, when called a big bellend, instantly lashed back with ‘So’s your mum’.

Whoever smelt it dealt it

Every schoolchild had this phrase at the ready for whenever someone nearby noticed that they’d accidentally farted. If you managed to shoot out this rhyme quick enough you were off scot-free, until someone else said ‘Whoever said the rhyme did the crime’ and everyone pissed themselves laughing at you.

You were the unsuspecting dolt who happily accepted an offer to join the Pen 15 club thinking you were finally being inducted into a secret society that you’d always suspected the cooler kids were part of. Your disappointment was crushing when they just scribbled ‘PENIS’ on your school bag with a permanent marker, called you a wanker and ran away.

I know you are, but what am I?

Who needs any other insult when you can have the other person do the work for you? You could just sit back and endlessly repeat this magic phrase while your rival worked themselves into a frenzy calling you a ‘twat sandwich’. This fiendishly recursive piece of logic made you invincible.

Child's Play, and other 18-rated movies you deeply regret watching too young 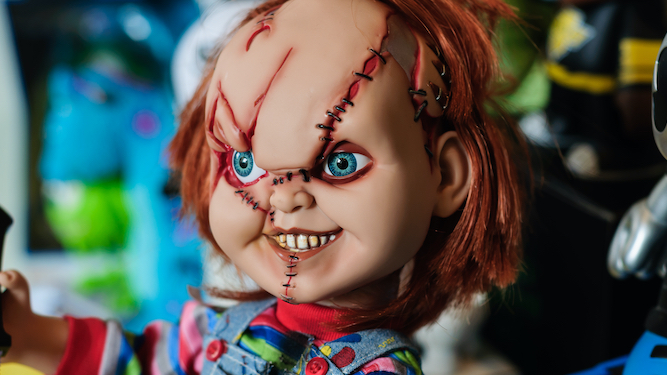 YOU stupidly thought you could cope with 18 films at 12 years old. Here are the ones you sneakily watched that traumatised you for life:

The modern remake was pretty creepy, but the original Pennywise was truly horrifying. ‘What could be scary about a clown?’ you thought as the credits started. A lot, it turns out. Within 20 minutes you were terrified of both clowns and public sewerage systems and the combination of the two.

Everyone at school was whispering feverishly about their fear of Chucky, but you weren’t about to be scared of a stupid doll. So you convinced your babysitter to let you stay up and watch it, then spent the next three months unable to sleep alone in a room and got a new babysitter.

Having borrowed the VHS off a friend’s brother, you thought you could go toe-to-toe with ‘the scariest movie ever made’. However, between the snarling possessed demon girl projectile vomiting onto a priest and her head spinning around like an infinite owl, you realised that you were a namby-pamby chicken, switched it off, and hid the video in the airing cupboard.

If you rewatch Alien now, you’ll find the special effects laughable. However, at the time the sight of the alien baby bursting through John Hurt’s stomach nearly made you piss yourself. For the next few months your nighttime routine involved checking the wardrobe for large-jawed, drooling space monsters and checking your face for face huggers.

You’d seen Robocop and reckoned you could handle metal machines killing each other, no worries. However, you hadn’t realised that Terminator 2 featured a terrifyingly realistic nuclear explosion scene, complete with charred limbs exploding into ash in the shockwave. Quite frankly that was keeping it rather too real for a fun summer blockbuster with a Guns N Roses theme song.