Southerners to live as Northerners for a week

A FAMILY from the south-east have swapped places with a family from Sheffield for a week in the BBC’s new twist on the survival TV formula.

The Steele family have moved from their £650,000 Hackney home for a house worth barely a third of that in the Sheffield suburb of Crosspool while cameras follow their struggle to cope.

“So we’re prepared for this as a social experiment, but something appears to have gone badly wrong. This house is massive.

“The air, which I expected to be black and filthy, appears to be substantially cleaner than at home and there isn’t the same wealth of art galleries, which frankly we don’t give a fuck about because we’re right next door to mountains and you don’t even have to queue for them.

“This is one of those trick shows like where they thought they’d been sent to space, isn’t it? Am I just drinking Vimto in the Cotswolds?

“Whatever. I’m not going back.”

Michael Fallon: It was such a different era a month ago 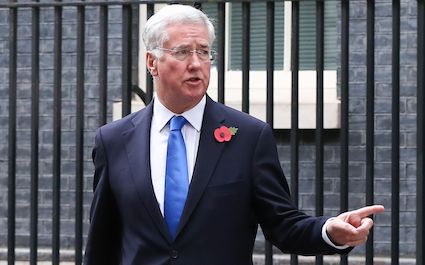 FIRST, I offer an unqualified apology for certain inappropriate behaviours on my part which fell short of the standard required of a cabinet minister. I am truly sorry, and truly sad.

This benighted era had social attitudes unlike our own. Young people, especially the very young, will not remember it but sexual conduct in the workplace was considered de rigueur.

Back then, girls were altogether racier and more good-humoured about flirtatious banter. If a colleague said her hands were cold and I suggested she warm them on my red-hot ramrod, seriously it’s like a three-bar fire down there, nobody would do any more than giggle salaciously.

They seem alien to us now, those days in which every workplace was like a Carry On film and researchers considered falling pregnant just an occupational hazard.

But times have changed and texting a young, attractive MP, the kind who is certainly inviting attention, an unsolicited photograph of your nether regions is no longer acceptable. And rightly so.

We must all of us recognise that the culture has changed. What was unfrowned on last Wednesday is appallingly dreadful in hindsight.

But we should remember that the people of the future, perhaps of December 2017, may look harshly on us and that it is unfair to judge the past by the standards of the present.

For now, let us just be glad those dark days are behind us. The dark days of October 2017.