HAVE you noticed yet again the difference between Brits’ legendary ‘Blitz spirit’ and how they actually behave in a crisis? Here’s the myth vs. reality.

2021 petrol shortage spirit: Brits are petrified that they may not be able to buy pre-prepared pigs in blankets, which are just sausages wrapped in bacon. For the second time, Brits go into a blind panic over KFC shortages as if sitting in an anodyne fast food joint eating chicken from a greasy box is their reason for living.

Blitz spirit: Ordinary members of the public risk their lives to evacuate British troops from Dunkirk on the ‘little ships’.

2021 petrol shortage spirit: Ordinary members of the public risk their lives to fill water bottles with a small amount of petrol which won’t get them very far and may curtail any journeys by turning their car into a blazing fireball.

Blitz spirit: Most Britons pull together and help out neighbours in need. (With some notable exceptions such as serial killers and thieves like ‘Mad’ Frankie Fraser.)

2021 petrol shortage spirit: It’s every man for himself as garage forecourts become a battlefield. A few more weeks of this and wholesale petrol station looting will take over, with people battering each other for a tube of Pringles or some manky daffodils.

2021 petrol shortage spirit: Britons grab as much for themselves as they can and f**k everyone else, just like earlier panic buying when an average household could end up with 10,000 tins of baked beans. 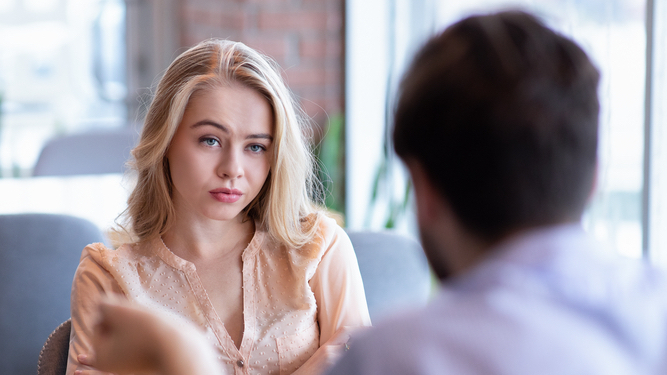 THERE are some go-to stories your other half cannot resist shoehorning into conversations. Here are five tales which will make your eyes roll so hard you’ll get dizzy…

That time they ‘met’ a celebrity

A story they’re always looking for an excuse to tell. The moment anyone mentions the word ‘train’ they’re off with a dull tale about how they saw James Corden and a friend on the 09:53 to Euston. They didn’t speak, and nothing much happened, so the thrilling showbiz gossip you get is that Mr Corden ‘seemed alright’ and ate a muffin.

That run-in with the doctor

Nothing makes for a good anecdote like a bit of drama – in this case a minor disagreement about antibiotics with their GP. But it’s told like it was an angry courtroom clash from A Few Good Men. Naturally your partner is the hero – articulate, friendly, but with a will of iron. The doctor is snide, argumentative and probably taking backhanders from drug companies.

That holiday they went on with an ex

Now you’ve bought a home and had two kids, there’ll be no more exotic holidays until you retire aged 80. Relive a happy holiday thanks to your partner banging on about the ‘magical’ fortnight they spent travelling around Japan with an old flame – who has become more and more wonderful in their distant memories.

That embarrassing incident at Christmas

This is not particularly scintillating to begin with – a mildly inappropriate present, forgetting to do sprouts, the time a paper hat from a cracker gave them a purple stain all over their forehead. Made all the more tedious with identical intonation, hand gestures and facial expressions from 10 years of retelling.

That incredible meal they had once

You’ve never eaten in a Michelin-starred restaurant. But you feel like you have, because your partner lists all 12 courses they ‘experienced’ from the poncey tasting menu when they visited one in 2015. It makes you starving. Which is a shame, because all you have in the kitchen cupboard are two bags of Mini Cheddars.