TWO stoned guys have concluded there is some sort of God but that all religions are nonsense.

Tom Logan and Nathan Muir got chatting at a mutual friend’s house party last night after going into the garden to smoke marijuana.

Logan said: “Nathan said he did he just didn’t follow any kind of organised religion, which I totally agree with.

“However we both believe there is a God because if you look closely at leaves, for example, there is a mad amount of detail and symmetry.

“I suppose that leads us to thinking God exists but it’s wrong to tell large groups of people about it.”

Muir added: “It’s always nice to have a chat with someone about the likely existence of some sort of eternal creator that is keeping everything in balance, whether we can see him/her or not.

“Maybe we should start our own sort of spiritual gatherings. But then if it got popular and became an organised religion we would disagree with it.

“Also it would mean getting up on Sunday mornings, which I think we all know is the real problem.

Friend with wife, children and six-figure job thinks he's better than you 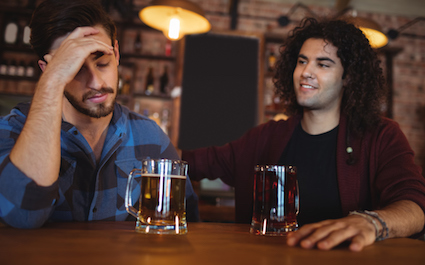 A FRIEND who has a stable marriage, two happy children, a fulfilling high-earning career, a big house and an expensive car believes it makes him superior to you.

Martin Bishop, who has known you since school, gave away that he considers himself to have made more of his life than you have when he not only bought all the drinks but offered to ‘help you out’ with a taxi home.

“I wouldn’t want all the sellout wife and kids stuff, which is why I never stay in a relationship longer than a year, and he wouldn’t want my – the things I – what I’ve got.

“Sure, if you judge by material success, or stability, or I suppose long-term happiness then he’s doing better. But he knows I don’t walk that path. Doesn’t mean he’s got any right to set himself above me.

“He was going on about this amazing California holiday he’d had with the family, a bit insensitive when he knows I spent the summer on remand and it wasn’t even my fault.

“I bit back the urge to say, ‘And that makes you better than me, does it?'”

Bishop said: “I think he’s back living at his dad’s again, aged 38. I mean I’ve only got so much pity to give.”