Piers Morgan: If we were truly a liberal country, we'd have more tolerance for a complete twat like me

Arseholes like me. And I can report that so-called ‘liberal’ Britain fails the test.

Anyone can tolerate the nice, the decent. David Attenborough. Brian Cox. My colleague, Susanna Reid. Even Stalin would have found it easy to tolerate Susanna Reid.

The real test comes in tolerating the vain, ubiquitous, toxic, narcissistic, bloviating, obnoxious members of humanity. Which is where I come in.

My role, a vital function for which I receive no thanks, is to expose hypocrisy.

Every time I come out with a thunderously excremental, self-aggrandising comment, every time I reveal myself to be a spadefaced, gassy, class A twat, am I thanked? Nobody says, ‘Well done, Piers, for acting the prancing, poisonous tit and proving that there’s room for all sorts in our democracy. You have proved our tolerance to be real.’

No, instead they call for me to be shot out of a cannon into a distant septic tank. 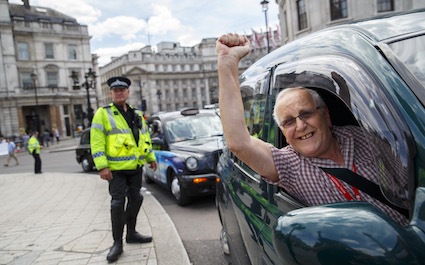 LONDON drivers have already started to relate to their passengers the Great Saga of the Black Cabs’ Triumph over Uber which will be told for centuries to come.

Historians believe that hundreds of years from now, when the city is sunk and Britain reduced to a primitive hunter-gatherer society, the oral tradition will still tell of when the indigenous people stood strong and repelled a great invader.

London cabbie Norman Steele told a passenger to Docklands: “Long had the Men of the Lore ridden the pathways in their Chariots of Ebony, educating supplicants to their Wisdom.

“But came a stranger from across many oceans, whose face was rectangular and black and shiny and who granted many magicks so even the unknowing could become charioteers in a white Toyota Prius.

“Yet they of times, and of other times, and of time and again would mislead the unwary by transporting them to the wrong Eurotraveller Hotel, for they did not know there were two in that Postcode because they had not the Knowledge.

“And the Ubers, though they swarmed the city, were driven forth by the Wrath of Khan and many went to the sea where they drowned and many left to be on other islands like Leeds and Cornwall and Cardiff, where they may still survive today.