A TEACHER unsure if he can manage an eighth straight night of drinking acknowledged that half-term gives him little choice.

29-year-old secondary school teacher Tom Booker told friends that, despite the debilitating physical effects, he feels honour-bound to spend the last nights of his holiday drinking until 3am and sleeping in until 1pm.

“Some of my colleagues take walking holidays or pop to Center Parcs with the kids, but I’m single and not outdoorsy so I spend the week getting shitfaced.

“Two more nights to get through, then on Sunday I have a big roast dinner and a bath and rock up Monday like I spent the whole time marking homework.”

Booker added: “Plus one of the year 12 lads has been in the pub every night so far, so to maintain discipline in the classroom I need to show I’m more hardcore than he is.”

Man at dinner party may be leader of the Liberal Democrats 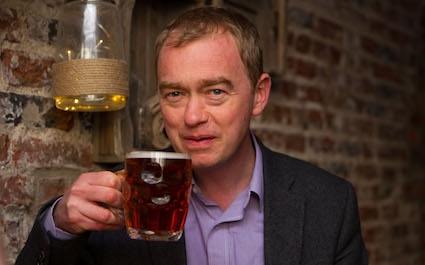 A SMARTLY-DRESSED man at a posh dinner party may well be Tim Farron, fellow guests have realised.

Suspicions began to grow that the man, who is in his mid-40s and of average height and weight, was the leader of a minority political party between the main and pudding courses.

Julian Cook of Devizes said: “He’s a Tim, but that doesn’t mean anything by itself. There are lots of Tims.

“But when I asked what he did for a living, he replied ‘Aside from the obvious?’ and told me actually it’s a very demanding position despite what happened last year, which left me no nearer.

“He does know Nick Clegg. Still, I suppose so do lots of people.”

Susan Traherne, who hosted the party, admitted she has known Tim since university but has never really been sure of his occupation.

She said: “He was planning to go into politics but I never heard anything else about it so assumed he’d given up on the idea. But the orange tie, the general hopelessness, I should’ve figured it out.

“I’ve a dreadful feeling I was slagging off the Lib Dems in the kitchen earlier in the evening. I hope he didn’t hear.”

Tim Farron said: “Oh for God’s sake. This is like the ninth time I’ve told them.”