A GROUP of teens staying at an isolated location have realised it is Friday October 13th and are resigned to their inevitable murders.

The teenagers, who were planning to party for two days at their misty camp deep in Snowdonia, only realised what day it was on arriving and have described their looming slaughter as ‘a real bummer’.

17-year-old Eleanor Shaw said: “Aw man. Murdered by a maniac with a grudge and a mask. And I was really looking forward to this weekend.

“I should have realised when there was no phone reception that someone was hiding in the woods to pick us off one by one in various gruesome ways, but I was all like ‘Whoo! Let’s skinnydip!’

“I suppose we do get to experiment with booze and sex for a bit first, but still it’ll cast a shadow over the whole thing. Plus I know he’ll kill me first, because I’ve got boobs.

“Bloody Friday the 13th. Which one is that? Him with the mask, or that one with knives for fingers?”

Shaw added: “Wait, why won’t Simon put his GoPro down? Seriously, is this one of those cheap-ass ‘found footage’ ones?

“Bollocks to this. I’m going home.” 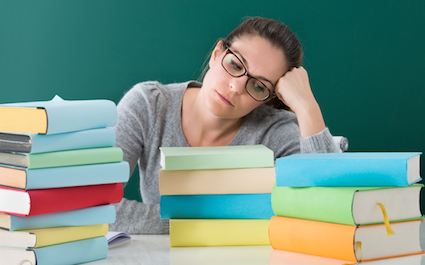 A POPULAR and inspirational English teacher puts no effort into her job whatsoever, she has admitted.

Francesca Johnson, aged 25, has won pupils over by encouraging them to write whatever they want rather than stick to the curriculum, which they have mistaken for street-smart charisma rather than simple laziness.

15-year-old Wayne Hayes said: “Cheskie’s the best teacher we’ve ever had. She really lets us take the lead in our education.

“Instead of giving us written homework to complete like robots, she asks us to think about big issues and present our conclusions orally to the class while she records them on her phone. Or does something on her phone.

“We can read whatever we want, she gets us thinking about the system with her morning rants against education and inspections, and she really believes in ‘unstructured learning’. And she’s pretty.”

Johnson said: “I don’t know how they’re inspired by me. I do fuck all.

“Thing is I was exactly the same at my previous school, before quitting the day Ofsted came in, and the clever kids passed all their GCSEs anyway so whatever.”