The Christian baker's guide to not making a gay cake

CHRISTIAN bakers are bravely holding out against making cakes for gay people. As the ECHR drops a case against two of them, godly baker Martin Bishop explains how to keep your cakes straight.

If you receive an order for a cake saying ‘Support gay marriage’, change it to ‘Be a heterosexual man and marry a lady’. Hey presto, the gays expecting a gay cake will be exposed to a straight message, become normal and stop hanging round public toilets.

Have the cake exorcised

If you’ve got a gay cake on your premises, play it safe and get a priest to cast out demons from it. Then burn it at the stake while reciting the Lord’s Prayer. The last thing you want is a possessed Victoria sponge making your customers commit depraved acts I cannot bring myself to repeat here.

To deter mincing homosexuals, decorate cakes with robustly heterosexual icing sugar images: a man buying a Black & Decker Workmate in B&Q, or a woman doing housework to please her husband. Pride flags and rainbows are out of the question, along with fairies, obviously.

Challenge gay cakes in the courts

People might claim you should just get on with making a bloody cake, because that’s your job and it’s a totally trivial issue anyway. No. You should spend years fighting requests for gay-themed cakes in the courts. What’s the point of a legal system if it won’t address the sexual orientation of a lemon drizzle cake?

God does not hate the cake, just its lifestyle choices. Pray for the cake to repent, so that when it has been cut up into slices and eaten its immortal soul will still get into cake Heaven.

Conversion therapy will stop your cake having unnatural urges. Ask the cake if it really wants to be gay, or is it just doing it because of peer pressure? It may be a traumatic process for the cake, but it will thank you later when it realises it doesn’t have to wear an earring and listen to Bronski Beat. 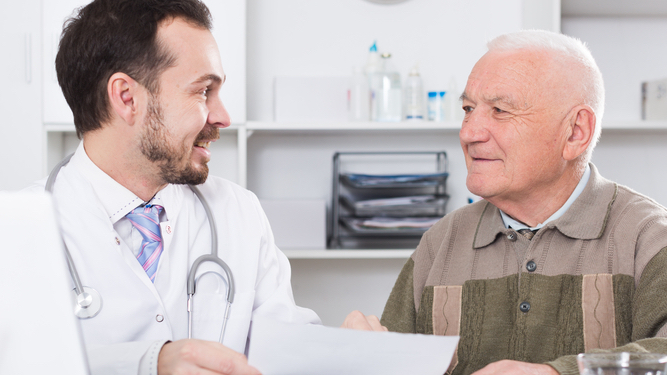 A MAN was left shocked when his GP kept chatting casually as if he did not have his finger up his anus.

Steele said: “The doc seemed a bit on the chatty side from the start, but I presumed he’d pipe down once my arse was out. I only started to panic when he asked me about what team I supported as he popped his gloves on.

“It’s incredibly difficult to calmly chat about the merits of 4-4-2 versus 4-3-3 without your voice breaking as a bloke wags his finger around in your bottom. It’s like a challenge from some twisted version of The Cube.

“I don’t want to discuss I’m a Celebrity while some man wears me like a giant novelty ring. I’m here to find out why it feels like I’m going to burst into flames whenever I go for a piss.”

Dr Malley broadened the chat with a lighthearted account of recent staff shortages at the clinic due to colds, but Steele was preoccupied wondering if he was trapped in Hell.

Responding to the criticism, Dr Malley said: “We can talk through any issues Mr Steele may have with my bedside manner when he’s next in, I believe for a testicular cancer examination.

“I’ve already got some great bantz lined up about Man City and the weather. It’ll be fun.”