THE Voter ID Bill is nothing compared to these ways of proving you’re a UK resident. Take these items to the polling station:

It is illegal to live in the British isles without a kettle, and the old ladies manning the polling lists will immediately be able to spot a genuine resident by checking whether it’s still warm from your last cuppa. Ideally, display signs of agitation that, having finished your last hot drink three minutes ago, you are currently unable to boil it for the next one.

Having a special card that allows you to waste your weekends trudging around tedious old manor houses proves you’re a true Brit. Using this as ID will appeal to the Tories, as 90 per cent of National Trust members are rich boomers with large pensions who think a Labour government would force them to become trans.

As a proper, responsible, guilt-ridden British person you own a bag for life. In fact, you have about 30 stashed away under the sink, all carefully folded. Reject the Lidl bags and take the Waitrose one to the polling station so your fellow voters treat you with deference and respect.

Other cultures have a vast range of delicious jams and preserves to put on toast, but the British favour a sludgy brown by-product of beer brewing to spread on theirs. Arrive at the polling station clutching a jar and you’ll be waved through instantly as no one from another country would even touch anything so disgusting.

Copy of The Sun

Only British people consider a hysterically right-wing comic with very large writing to be a good news source, so carrying a copy of The Sun is an easy way to prove your nationality. It’s also an easy way to demonstrate you’re going to vote for UKIP, even if they barely exist anymore.

The stoner's guide to fine dining 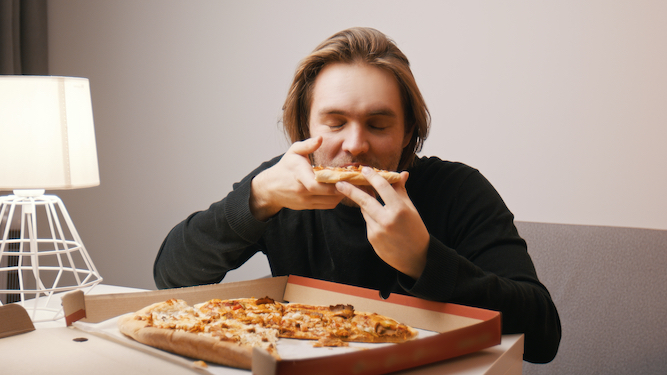 YOU’VE smoked a couple of joints and now you’re starving. Here’s how to dine like a king when you’re buzzed off your tits:

The ultimate late night remedy to your massive attack of the munchies. Problem is, it involves several dangerous procedures, like using the hob and handling raw meat. It’s better to just empty a pack of Frazzles between two slices of bread: you’ll be too stoned to notice the difference anyway.

A plastic tub of salty loveliness that will fill you up for at least half an hour. Pour on boiling water before realising that waiting four whole minutes for it to be ready is far too long. Instead, wolf it down while still crunchy, simultaneously burning your mouth and giving yourself chronic indigestion.

Cheese is the food of the gods when you’re stone cold sober, so when you’ve got the munchies it’s even better. Dispense with biscuits, plates and even knives and simply bite big chunks off the block, before putting it back in the fridge and forgetting about it until your partner discovers it the next day and goes apeshit.

Despite the fact that they are made of dust and air, Monster Munch are amazing when you’re stoned. Rip open a bag of Roast Beef or Pickled Onion before realising there are only seven of the f**king things in the bag, then devour the rest of the multipack you thought would last a week.

You’re far too off your tits to make any food yourself, so why not ring Domino’s? Unfortunately, by the time they arrive you’re so paranoid that you think they’ll be able to tell you’ve been smoking weed and might call the police. Refuse to answer the door and insist they fold up your pizza and post it through the letterbox instead.