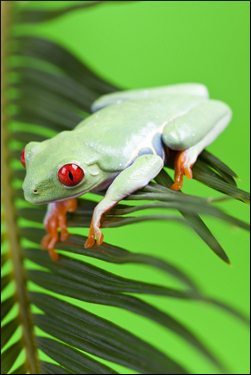 SUPERFLUOUS wildlife is still hampering vital progress in the logging and fast food industries, it was claimed last night.

Despite their declining numbers, obscure species like the Patagonian fox wolf and a type of ochre-coloured bear that smells of burned peaches still pose a serious hindrance to companies working to transform their dank, hostile forest habitats into something useful or tasty.

Logging company boss Roy Hobbs said: “The rainforests are still absolutely riddled with weird-looking, time-wasting creatures that try to hump your leg and make a real mess when they get mulched up in heavy machinery.

“I personally spent most of this morning picking bits of some slow-moving marsupial dog out of caterpillar tracks, and ruined my chinos into the bargain.

“Probably some of these species haven’t even been named. Although I collectively call them ‘fuckers’.”

He added: “The worst are the cute ones, because everyone stops to coo over them. Then before you know it the kettle’s on and that’s an afternoon wasted.”

Experts at the Institute for Studies estimate that there are as many as 10,000 species that still refuse to die out, despite being completely obsolete in any evolutionary sense.

Prof Nikki Hollis said: “We’ve got plenty of what you might call ‘proper’ animals â€“ dogs, horses, cats – but there’s still way too much random shit out there that serves no useful purpose and doesn’t even taste good.’

“And there’s plenty of losers who are determined to save them because they had some sort of pathetic eco-warrior epiphany while watching Avatar, not even realising that the reason their wiener cost a fiver is that busy pig farmers keep getting molested by simian owls.”