TWO laptop users have died in a brawl over the only remaining power source in a coffee shop.

Eyewitness Wayne Hayes said: “There was only one plug socket left in the Caffe Nero because a group of Spanish school kids were all charging their iPhones.

“Most freelance computer workers can barely manage eye contact, let alone combat. Nobody would have expected that, within minutes, they would literally both dead on the floor.”

Barista Nikki Hollis said: “They’d both invested in a coffee so they didn’t feel so guilty about spending five hours refreshing their emails.

Brookes described: “One just proper went for it, bashing his rival’s lights in with a thick, 2007 15” MacBook Pro. The weaker freelancer only had a one of those MacBook Airs, which just crumbled to pieces on impact.

“Then they wrestled each other to the ground to the bitter end. To be honest, I think they were both enjoying the rare physical contact a little bit.”

By the time the police had arrived on the scene, a third party had already stepped over the bodies to plug in a Samsung Galaxy.

You realise we do all the work, say immigrants 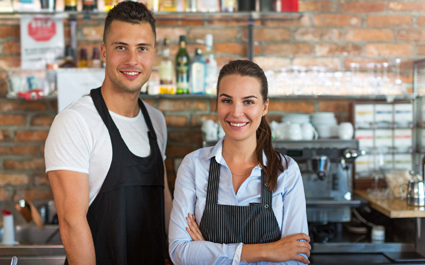 MIGRANTS have reminded Britain that they do pretty much all the work.

They pointed out that they were not invited to leave their cherished home countries as a result of some experiment in multiculturalism imposed by the liberal elite. Nor did they come here because it was their dream to luxuriate on the dole in Dover or Braintree.

Tom Booker, who anglicised his name to avoid having stale pastries thrown at him, said: “Do you seriously think we dreamed of leaving our homes to settle in your idyllic country of roundabouts, multi-storey car parks and precincts?

“But we do apologise if our slightly swarthy complexions and occasional grammatical errors are an intolerable burden on you.

“Naturally, we’ll follow government plans and sod right off back home. Oh, and if your economy should take an unexpected downturn, feel free to come over here and pick our potatoes.”