EXCEPTIONAL students will be offered a guaranteed loss of virginity by universities vying to recruit them, it has emerged.

Tom Logan, deputy bursar at Roehampton University, said: “Universities have finally cottoned onto the fact that very bright teenagers are often socially and sexually inept, and are likely to still be wearing ‘the V-neck jumper’ when they leave school.

AAB science student Stephen Malley accepted a place at the University of Polytechnic on the basis that he would get a 12 minute sexual experience with a sober female.

He said: “There were other factors too, such as the excellent library, good laboratory facilities and wide-ranging social activities. But mainly it was because of the vagina.

“Once you’ve matriculated, you are asked your sexuality and are then pointed towards the appropriate queue. Basically there are two Portakabins, each containing a male or female prostitute.

“Overall the intercourse was excellent with only a slight underlying anxiety that I was being covertly graded on my sexual performance, which was definitely below A* level.” 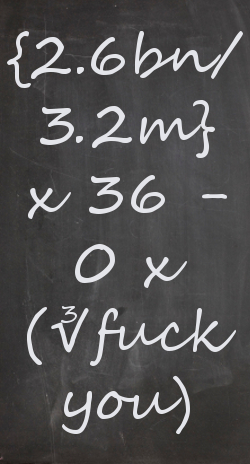 BONUSES at Barclays will rise despite a fall in profits because that is just how the whole thing actually works, the bank has explained.

Barclays half-year profits plunged by 33%, in part because the bank paid out £1bn in insurance mis-selling claims due to the company’s executives being very bad at their jobs.

The rest of the profit slide was caused by a variety of other factors involving the company’s executives being very bad at their jobs.

But the bank stressed that those executives would still receive generous bonus packages because that is how it ‘works’.

A spokesman said: “We use a very complex formula to calculate bonuses, so if, for example, profits fall by 33% then bonuses would only go up by 72%.

“It should be obvious how those two numbers are related, but let me explain it anyway.

“What we do is we take the amount of money the bank has made, divide it by the amount our executives would like to earn, amortise that figure over 36 months, net of tax that will be avoided anyway, and then multiply it by the cubed root of not giving a fuck what you think.”

The spokesman also stressed that many Barclays staff are talented and sought after individuals who either lend money at highly skilled rates of interest to people who are fairly likely to pay it back, or they skilfully buy and sell shares in profitable companies run by people who are not very bad at their jobs.

He added: “I hate to think what would happen if the people who don’t work here didn’t know what they were doing.”