37-YEAR-OLD Waitrose shopper Emma Bradford is struggling to cope after the supermarket cut her hot drink benefits, she has revealed.

Bradford visits the supermarket twice a week, not including occasional emergency Chablis runs, and had come to rely on its unlimited free tea and coffee.

She said: “It began when I tried helping myself to a latte and a Waitrose worker took me aside and suggested that I buy a croissant first. Apparently there had been a ‘rule change’.

“I politely explained that I didn’t want a fucking croissant and that as she was someone who wore an apron to work she perhaps needed to consider her place.

“Although I haven’t seen I, Daniel Blake, it sounds quite like my situation. An innocent person becomes a victim of the system and finds themselves struggling with issues of self-esteem.

“I’ve got a Nespresso machine at home but only the cleaner knows how to work it and she isn’t in on Wednesdays or Fridays.”

She added: “Now I’ve been banned from Waitrose and there’s no other viable supermarket except maybe Sainsbury’s, but the aisles are very narrow and they don’t have quality mussels.

“I don’t see a way out of this living hell, except maybe to book a weekend at a spa hotel.” 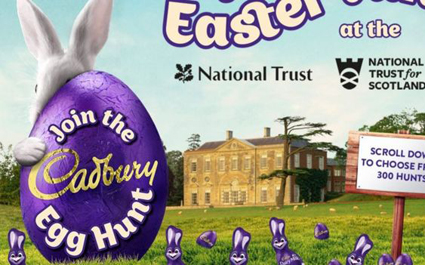 CHOCOLATE maker Cadbury has ignored the biblical story of Jesus getting a Wispa egg off a rabbit, it has been claimed.

Religious leaders attacked the confectioner for branding its Easter event as a non-religious ‘Cadbury Egg Hunt’, despite clear Bible references to a talking rabbit who gives Jesus a chocolate egg wrapped in foil.

Prime minister Theresa May said: “As a parson’s daughter, I know all about the Bible because it was the only book allowed in our house apart from the Yellow Pages.

“Matthew 15:39-41 clearly describes how, just as Jesus was feeling depressed about his impending crucifixion, a big friendly rabbit appeared and introduced itself as ‘Gregory’.

“Gregory the rabbit gave Jesus a basket containing a Wispa egg in a presentation box with two Wispa bars, and a packet of Mini Eggs.

“Jesus ate the lot in one go, he wasn’t worried about indigestion because he had other stuff on his mind.”

May added: “That, in a nutshell, is Easter. It’s a very clear and logical religious festival that we celebrate on a completely random date every year.”