WALES has begged Scotland not to leave it trapped in the UK with those two other mad bastards.

Wales, which shares with Scotland a minority language, tons of mountains and an affinity with alcohol, is terrified of being left alone with England and Northern Ireland.

It pleaded: “Safety in numbers, right? All Celts together? Please, you know what they’re like, always fighting and tanks and bombs and shit.

“I’d like to think I could just huddle up over here behind Offa’s Dyke and they wouldn’t notice me, but if you’re gone I’m the only one they’ve got to shout at.

”England’s polite enough but it just takes everything and gives it to spoilt London, and I can’t even understand Northern Ireland half the time.”

Wales particularly fears being drawn into sectarian arguments and being asked to give an opinion on religious questions, worshipping as it does small blue men who live in caves above the mist line.

Scotland has replied that it ‘just can’t stand it any more’ and that Wales would do the same if it could, and that it’d ‘bring Wales along if only they had contiguous borders’.

It then contacted Northern Ireland asking if they needed a couple of million lunatic Glaswegian Catholics and Protestants who liked marching, petrol bombs and very specific colours.

Floods to be followed by giant wolf eating the sun 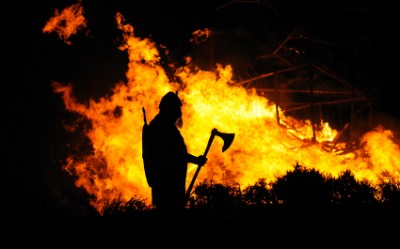 METEOROLOGISTS have confirmed that Ragnarok, the Viking apocalypse, will happen later today.

Weather experts confirmed the event after reading up on Norse mythology, which describes extensive flooding followed by monster-based chaos.

A Met Office spokesman said: “Just when you thought things were calming down a bit weather-wise, a giant wolf is going to swallow the sun.

“Meanwhile Thor is to battle a world-girding serpent and the gates of Hell will open, its denizens spilling forth to wreak havoc on earth.

Eleanor Shaw, from Leeds, said: “The Vikings predicted the Earth falling into the sea which is pretty much what’s happened to my nan’s house in Ironbridge.

“I’ll be staying in with a grab bag of Doritos and watching the action live on Ant & Dec’s Ragnarok.”

Slayer fan Wayne Hayes of Nottingham said:  “There’s going to be dwarves fighting ice giants and a bone ship full of skeletons. Basically it’s the full on metal apocalypse depicted on all of my T-shirts.”