Want go Primark and pub-pub, by a grown British adult

by Stephen Malley of Solihull, aged 43

LOCKDOWN stupid. Want go Homebase and get big plant pots and go pub with Pete, Gavin and Steve. Covid is silly and stupid and I hate it.

Primark open now. Want get cheap clothes. If no one let me purchase two shirts and a pack of 12 polyester socks they meanie poo-heads. Yes you too Boris.

Had fight in JD Sports. I saw trainers that were 25 per cent off first, but man said he saw first and was buying if in stock in a size 10 so I broke his nose. Serve him right. I am cock of JD Sports now.

Got trainers but should have got the other ones that were better. Probably won’t wear them.

Pub-pub open! Can’t wait another moment so outside before they open. Brought kids so they can have crisps. Wife said silly but I said I will scream and cry if I can’t have pub Stella drinks.

Pub has big toilet that smells nasty but Gavin was there and we weed together standing at urinal trough like real men. It was brill.

Everything back to normal now so I can have McDonald’s Big Mac meal with super-large shake. Queue in traffic for 11 hours if necessary. It just what being an adult about.

Which politicians would actually be a laugh down the pub? 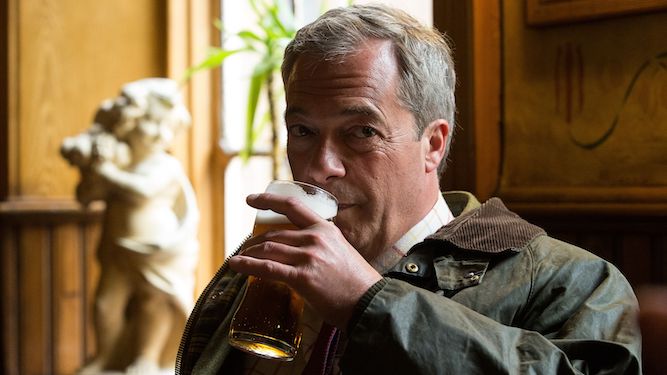 FROM Farage to Johnson, British politics is awash with politicians whose popularity is based on the spurious notion they would be good company over a pint. But would they?

Has spent most of his political career planning this pub trip, but doesn’t seem at all prepared. As Jennifer Arcuri revealed, he’ll arrive without enough cash to buy a round and will then go on to cadge fags, order a meal he’ll definitely pay you back for and then simply f**k off while you are at the bar, leaving you holding two pints.

Broadly supports the decision to order a Peroni, but ‘would have done it much sooner’. Drily participates in classic pub debates like Maradona v Pele while attempting to agree with everyone on all sides. Unable to understand why this doesn’t result in everyone being his mate.

Really friendly, really nice, gets all the drinks in, generously pays for two rounds of shots for everyone, just keeps saying ‘don’t worry, you’ll all pay me back later’ which becomes gradually more sinister.

Pub bore best avoided because every conversation comes back to the one topic of her upcoming divorce and how bloody great her life will be afterwards. Puts the Scotch away like there’s no tomorrow.

Cheats on the pub quiz by texting his mate the landlord for the answers. When confronted he points at a picture of Captain Tom then runs off.

Has only ever visited a pub for publicity, because he’s a privately-educated former stockbroker who’s spent most of his life working in Brussels. Looks confused when no cameras or reporters arrive. Tries to go behind the bar to pull his own pint and is asked to leave.