IT’S Black History Month, so white people who couldn’t give a f**k the other 11 months of the year are suddenly history buffs. HGV driver Stephen Malley runs through it:

Beating Napoleon at the Battle of Hastings

Napoleon was a tiny onion-eating French weasel who got what he had coming to him. He came on the beach at Hastings on 1066 and our boys used their longbows to send him and his surrender monkeys packing. And we did it again on the 1,000th anniversary in 2016, with a democratic referendum.

Fighting off the Spanish Armada

One of the proudest moments of Queen Elizabeth’s reign was when Francis Bacon led our world-beating navy to victory against those burrito-eating bastards. It’s how we won Gibraltar, and if they think we’re giving it back, they can f**k off.

What these ignorant Black Lives Matter people forget is that Britain actually ended the slave trade, so we’re the good guys and if it wasn’t for us, Barack Obama would never have become president. In conclusion, there’s no-one less racist than the English.

Christ, it’s been a effort not mentioning the only bit of history that matters until now. Anyway Spitfires, Churchill, the Blitz spirit, rationing, land girls and Dunkirk. WW2 is the only time the UK has ever been properly good. After Brexit we’ll be able to return to those days. By invading Europe.

The proudest moment of British 19th-century was when Geoff Hurst won against those wurst-eating wankers. If he hadn’t scored those goals, we’d all be speaking German right now — but ‘real history’ is too much for these bloody liberal snowflakes to hear. 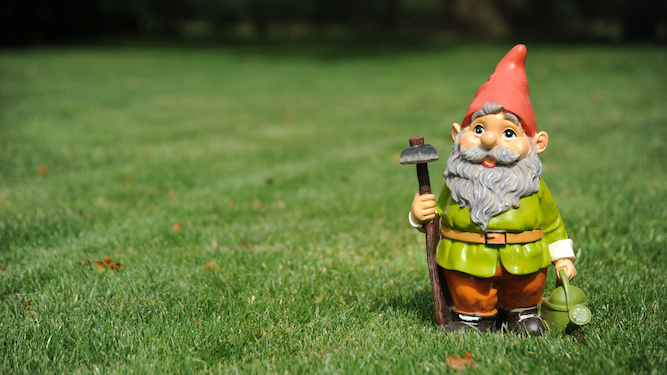 MANCHESTER UNITED have moved to strengthen their defence by swapping Harry Maguire for an arthritic garden gnome with a glass eye.

The England defender’s performance in United’s 6-1 defeat to Tottenham yesterday has prompted manager Ole Gunnar Solskjaer to scour the country looking for an improvement, and finding the gnome almost immediately.

Solskjaer said: “The gnome isn’t the biggest, can’t run properly because of the inflammation of his joints, and is obviously monocular. It’s a fantastic upgrade on Harry, who we’ve told to self-isolate for the rest of the season.

“We’ve paid Dobbies a transfer fee of £16.48 and the gnome’s joining up with the rest of the squad after the international break. He’s not played for a while, what with the eye, the leg and the fact he’s a cheap pottery ornament that could only stop a football if it’s kicked directly at him.

United fan Nathan Muir said: “We had to act. I felt lower than I’ve ever felt yesterday, with the gloating Liverpool fans all over social media.

“Oddly they went totally silent after less than an hour, though. I wonder why?”