We'll never argue like that, say couple who've been together for a month

A NEW couple have vowed they will never turn into one of those awful couples who snap and shout at each other.

Tom Logan and Helen Archer, who just celebrated their one-month ‘anniversary’, made the decision after spending an evening with friends who have been married for six years.

Archer said: “They didn’t seem in love at all. There were long stretches of silence that they didn’t fill with excitable chatter or endless questions about each other’s lives.

“They weren’t constantly snogging or touching each other inappropriately under the table. If our relationship ever becomes that stale and lifeless, just take us out and shoot us.

“They kept having arguments, like when Stephen wanted to order a pizza and Nikki said she wasn’t sure instead of instantly agreeing with him. Tom and I always agree. That’s what love is.”

Logan said: “They had a really tense conversation about his mother visiting where Nikki rolled her eyes. Helen would never do something like that to me. I felt sorry for them.”

Logan replied: “No it isn’t. Stop trying to undermine me. I love you.” 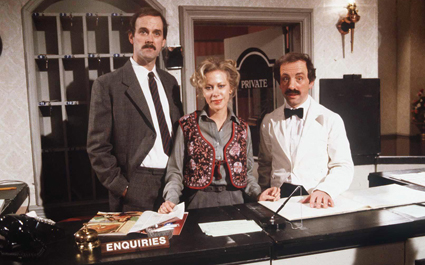 A REMAKE of Fawlty Towers has been criticised for stereotyping the English as stupid and gormless because they voted for Brexit.

The updated version of the series is set in a Torquay hotel run by Basila, a 36-year-old woman from Barcelona with a first-class degree in management studies who is fluent in four languages, including German.

In the first episode, The Immigration Officers, the hotel is thrown into chaos as Basila is deported back to Spain due to an error by the Home Office, leaving Manny in charge.

Hilarity ensues as Manny insults his German guests by telling them Angela Merkel is the new Hitler, before setting fire to the hotel trying to prepare 20 fried breakfasts, now the only thing on the menu.

Forthcoming storylines include Manny getting into a dispute with some Irish builders which leads to the collapse of the Good Friday Agreement.

In the final episode, Manny is forced to kill and eat his pet rat due to chronic food shortages in all the shops.