A SUCCESSFUL couple have put it all down to luck while also not wanting you to believe that.

Rich people Emma Bradford and Stephen Malley confirmed they have had a huge amount of luck in their business and personal lives, although they deserve it because they are amazing.

Bradford said: “We are so lucky to have twelve types of high quality soap in the largest of our four bathrooms, and we wear a lot of white billowy clothing.

“Our large portfolio of coastal property is nothing to do with us being amazing. We don’t think we’re amazing.

“Although if you wanted to draw that conclusion, from our good taste and lucrative protein milkshake business, it would be entirely up to you.”

Stephen Malley said: “We really appreciate our good fortune in coming from good families, good schools, and being good-looking.

“And now we want to share that sense of gratitude. By telling you about it.”

Londoners obediently queueing for some bullshit 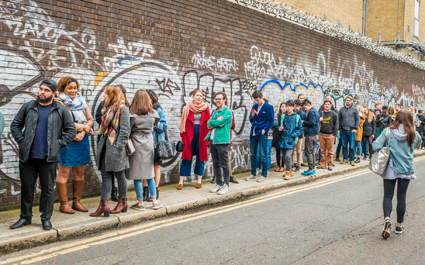 A QUEUE of Londoners don’t even know what bullshit they are lining up for, they have confirmed.

Although the Londoners are almost certainly waiting in line for some bullshit, it is unclear to anyone involved what the precise nature of the bullshit might be.

Queue participant Stephen Malley said: “It’s probably some ‘coffee festival’ thing, or a temporary shop selling t-shirts and trainers that are very slightly different to the ones in normal shops.

“These other people probably heard about this bullshit on some social media thing, which means it must be good.”

Fellow queueing person Mary Fisher said: “I hope the bullshit is a restaurant selling tarted-up American junk food that doesn’t take reservations and only lets you sit down for a strictly monitored 40 minute time slot while other would-be diners glare at you with unadulterated hate in their eyes.

“I know that sounds horrible and needlessly stressful but that’s the sort of thing we like in London.”