LIBERAL western culture does not seem to have noticed it is under threat, experts have confirmed.

The Institute for Studies has found that Europe is positively teeming with Europeans, many of whom are drinking alcohol, disrespecting their parents or having pre-marital sex at this very moment.

Professor Henry Brubaker said: “Everyone keeps saying western culture is under threat from Muslims or something, so we thought we’d better check. Turns out it’s not.”

The Institute asked a dozen volunteers to record their everyday experiences to measure the extent to which liberal western values are being steadily overwhelmed by a never-ending tsunami of differentness.

Professor Brubaker added: “We basically just asked them to walk around for a bit and see if they noticed any stuff.”

Research volunteer, Stephen Malley, a personnel manager from Finsbury Park, said: “I get up at 7.30. My bedroom is  generally free of Muslim extremists. Maybe they all congregate there when I’m at work. Who knows?

“I have a hate-free, non-halal bowl of Cheerios and a cup of coffee that does not have an opinion about the role of women in society. Meanwhile, I listen to an oaf on the radio making jokes that I doubt were approved by an imam, or indeed someone with a brain.

“During my walk to the bus stop I pass – on average – three women wearing burkas and 75 women wearing short skirts – and I mean short. They seem happy and at no point does anyone convert them to Islam or criticise their choice of clothing. In fact, I sense approval.

“The bus is driven by a man with dark brown skin who sounds exactly like me. I would not be surprised if at least one of his grandparents arrived in Britain before mine did. The bus is filled with a variety of people. None of them try to undermine my values. They mostly just sit there.

“When I get to my desk I spend about two hours reading newspaper websites that seem to be able to publish whatever they please, including articles about how western culture is being destroyed by immigration. I sometimes wonder if I’m supposed to be scared.

“During the day I chat to my colleagues. At no point does anyone set fire to anything or call me ‘the Great Satan’.

“After work I go for a pint of beer. The barman does not seem ashamed to serve me, even though the fucker is charging me an insane amount of money.

“I get the bus home, eat a pork chop and then flick through more than 100 channels filled with people expressing themselves freely. I have so far been unable to find an Islamic fundamentalist channel. I shall keep looking.

“Often I will watch Sex and the City and marvel at the sexual athleticism of the older one, and some evenings my boyfriend and I will discuss our upcoming civil partnership ceremony. Thus far, no one has arrested us for doing this.

Are we doing enough to halt the rise of complete and utter psychopaths? 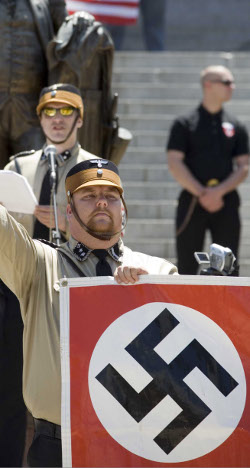 QUESTIONS were being asked across Europe last night if enough is being done to stem the rising tide of total insanity.

Politicians are coming under increasing pressure to explain what they are doing to ensure that people do not lose their minds and go completely fucking apeshit.

Experts said psychopaths were growing in strength and number due to a range of factors including mass, uncontrolled internet access and a chemical imbalance in their brains.

Professor Henry Brubaker, of the Institute for Studies, said: “European democracies need to act now to prevent some psycho sticking his head into his computer and coming out covered in hysterical, racist bullshit, rather than say Scientology or a lot of arse about herbal remedies.

“Crazy Scientologists never do this kind of thing because they’ve given all their money to the L Ron Hubbard Foundation for Mega-Thinking and don’t have any left to buy guns.

“And some homeopathic nutter can’t really do that much damage armed with a bushel of sage and a mystic aubergine.”

He added: “We need to use our democratic institutions to make sure that people who are completely insane do not fixate on some spurious rationale for their need to commit murder.”

Julian Cook, professor of medieval history at Roehampton University, said: “Could I just point out that if some lunatic compares himself to the Knights Templar we should take that seriously because they were fucked-up, racist murderers who believed in a fantasy as well.”

Meanwhile, the Daily Mail has confirmed it will wait another 24 hours before announcing reluctantly that this is all the sad but inevitable result of multiculturalism.