Government to buy Tevez for the nation

THE government has tabled an ambitious £50m bid to preserve Carlos Tevez for the entire nation.

Manchester City are considering an offer from the department of culture, media and sport that will see the creature placed in a cage atop a plinth in Trafalgar Square, Runnymede or Alton Towers.

Sports minister Hugh Robertson said: “It’s important that we keep a native one alive and flourishing in the UK so future generations can tell their grandchildren they fed a lamb chop to an actual Tevez.

“He’s such a magnificent specimen and I’m sure that anybody that takes an interest in the Welsh will want to see him up close.

“Oh, he’s not Welsh? Are you absolutely sure about that? I really think you should check.”

The government faces competition from Inter Milan but Robertson has asked City to consider the warnings of welfare groups who claim Italy has an appalling record in the treatment of Tevezes.

He added: “He’ll be cooped up in a villa barely big enough to allow him to make a nest and defecate in.”

“And rather than fresh, raw meat from one of Britain’s excellent organic farms, they’ll try and force feed the little chap some pasta, which he is simply not designed to digest.”

Robertson said there were also plans for a national institute specialising in Tevezology and a scholarship programme that will teach depraved children how to chase down and devour an elk.

Britain decides not to boycott every last detail of Winehouse death 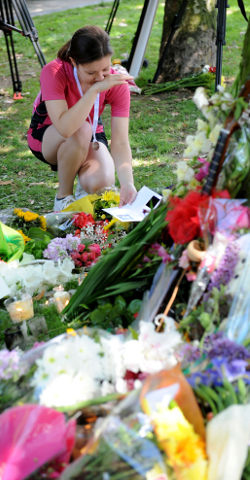 BRITAIN’S disgust with tabloid journalism was suspended yesterday in honour of Amy Winehouse.

Newsagents across the country reported sad-faced customers picking up copies of tabloid newspapers and shaking their heads mournfully as they handed over the money.

The temporarily un-disgusted readers then sat around kitchens and gastro-pub brunch tables reluctantly swapping every last detail of the death of the tragic singer and saying things like ’27 eh? Just like Judy Garland and Elvis’.

Tom Logan, from Finsbury Park, said: “I will of course go back to being disgusted with the nauseating culture of intrusive journalism next week, but I just felt I had to do this for Amy.

“She was a troubled soul who was in a constant battle with her demons, according to this remarkably detailed article in the Mail on Sunday by someone who obviously really cared about her.”

Helen Archer, from Peterborough, said: “I know that Amy would have wanted me to join the Sunday Mirror in speculating wildly.

“In her memory I will believe – and regurgitate – this heartfelt speculation and then I might play Back to Black in the car this afternoon on the way to the gym.”

Emma Bradford, from Hatfield, added: “I know that it now seems likely that she drank herself to death, but the Mail on Sunday lifted a story from the Sunday Mirror that said she took a cocktail of drugs, so I’m going to stick with that.

“If only the News of the World was still here, I would have been able to have opinions about the tragic content of her final voicemails.”

Yesterday crowds gathered outside the North London home of the tortured soul diva, craning their sad necks to respectfully gawp at her body being put in a van.

Stephen Malley, who had been standing there sensitively for an hour with his camera, said: “It’s incredibly important to me to show how much I care and I know that Amy would have wanted me to have something to talk about when I meet my friends for a drink tonight.”