A WOMAN is beginning to make headway on the enormous frothy cup in front of her.

Sarah Malley ordered a grande latte from Starbucks back in June and was shocked when it required the efforts of four people to get the cup back to her table.

She said: “This latte has taken over my life. I keep taking swigs but it never seems to make any impact.

“All I wanted was a caffeinated drink but now latte consumes my every waking hour. I’m more latte than human.

“Sometimes I fear that I’ll never see the bottom of my cup and will pass this frothy burden onto my children.”

A Starbucks spokesman said: “We advise customers that a Short drink generally keeps them busy for an hour or so, a Tall will take most of a day while anyone ordering a Grande is making an important life choice.” 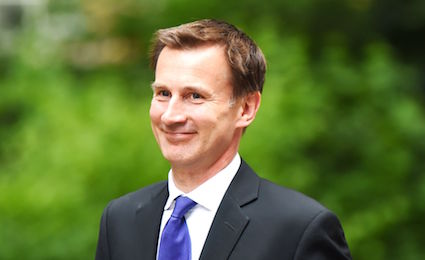 JEREMY Hunt will remain as Health Secretary because the prime minister is a misanthropic lunatic, it has been confirmed.

Theresa May said her loathing of Britain and its people was now so deep that she had no choice but to allow Mr Hunt to ‘finish the job’.

A source said: “Initially Theresa told him she wanted to move him to education and then he burst into tears. Then he got all angry and then he started crying again.

“Then the prime minister punched him in the throat and that seemed to calm him down.”

The source added: “But then she realised that keeping him in place would make everyone in the country incredibly unhappy and that made her giggle.

“She did warn him that if the NHS is still in existence this time next year, she will throw him into a pit full of rabid junior doctors.”