Woman mistakenly believes she was fun and interesting before having kids

A MOTHER-OF-TWO incorrectly believes she was a really fun and exciting person before having children.

38-year-old Emma Bradford claims that simply everyone wanted to hang out with her before her kids ‘took over’.

She said: “As much as I love my children, I’m just constantly knackered from clearing up after them and it has really changed my previously amazing personality.

“When I was single I just used to light up the room with my hilarious banter and controversial but well-considered political opinions.

“Everyone wanted to shag me.”

However Bradford’s former colleague Nikki Hollis said: “I remember her as a pleasant enough person.

“Sometimes I would offer her a Malteser and she would meekly accept. I’d describe her as a reliable and pleasant conformist.”

Bradford added: “No, I was this amazing whirling nucleus of creative and sexual energy. You should have seen me, really.

“Then I got ‘baby brain’ and suddenly became a quite standard person who slavishly follows Richard and Judy’s Book Club.” 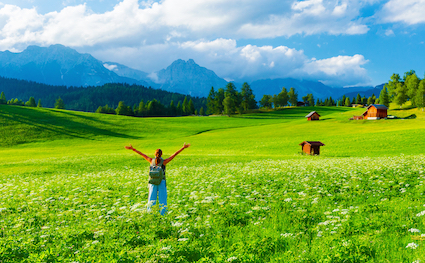 Millions of people around the world are to spend the day dreaming of sunlit alpine meadows and crystal clear mountain streams.

Tom Logan, from Stevenage, said: “I am emerging from a forest into a clearing that is scattered with fragrant wildflowers.

“It is silent, perfect and forever beyond the reach of a dangerous imbecile who wants to turn it into a golf course surrounded by a massive wall.”

Mr Logan spoke while pushing his way onto a packed commuter train full of glassy-eyed people with placid smiles.