AN OFFICE worker has been furious with his colleagues, clients and all office equipment for seven years straight, it has emerged.

Systems analyst Wayne Hayes has been at the same company for eight years, remaining irritable, impatient and uncommunicative for all of that time.

When not muttering under his breath about the intranet or eating his sandwiches alone in the car park, Hayes is enraged about his portfolio of clients, whom he describes as ‘fuckheads’.

Colleague Nikki Hollis said: “I don’t know what would make him happy. Perhaps an apocalyptic event that destroyed everything on earth except him and his Honda Civic?

“If he doesn’t like it here, why doesn’t he leave? Apart from the obvious, which is that it’s hard to get any sort of job and he must work to keep a roof over his head because he was born into the lower echelons of an inherently unfair society.

“Actually I can sort of see where he’s coming from.”

Co-worker Tom Booker said: “It is shit working here, most of us try to make the best of it but Wayne responds truthfully to his situation like some sweary Buddha. Either that or he’s just a miserable bastard.” 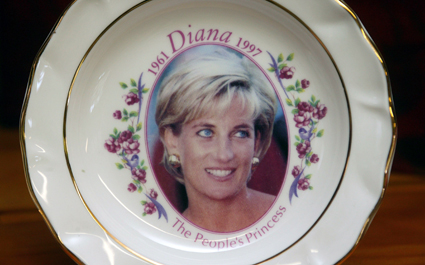 BREXIT voters are flocking to see a Princess Diana plate that weeps real tears, it has emerged.

Thousands have converged on a semi-detached house in Lewisham, to see the miracle that proves Britain must protect its sovereignty.

“I looked up at the wall-mounted plate and sure enough a perfect tear was rolling down Diana’s delicately-rendered china cheek.

“The only way we can stop her crying is to get out of the EU as soon as possible.”

She added: “Some visitors say she speaks to them, gently whispering that they are not to buy foreign products like Brie and Toblerones.”

Brexit supporter Roy Hobbs said: “I had to come, if only to stand guard over this high quality limited edition souvenir so that no immigrants can pinch it.”