Workers advised to overpower boss and take the money

BRITISH workers in need of a pay rise could simply take it by force, it has been claimed.

As the government urged employers to share the spoils of economic recovery, office workers in Sheffield secured a pay rise simply by pinning their boss to the ground.

Administrator Tom Booker said: “I asked for a below-inflation pay rise and he said ‘we’ll see about next year, things have been a bit tough’. Which is weird because he bought his wife a new Mercedes coupe last month.

“A bunch of us were chatting and we were like, he’s not physically strong and there’s loads of us.

“We just pinned him to the floor and threatened to drop a printer on his head. Pretty much straight away he said we could all have a pay rise.

“Obviously the money was there all along. People soon change their minds when it looks like you are going to kill them.”

Booker’s colleague Julian Cook said: “It was like Rise of the Planet of the Apes, but with people instead of apes.

“I would recommend staging a workplace revolution. No boss can really tell the police because they all break the law on a regular basis.

“Best of the all the drinks machine is on permanent free vend now – even for soup which was previously 80p.” 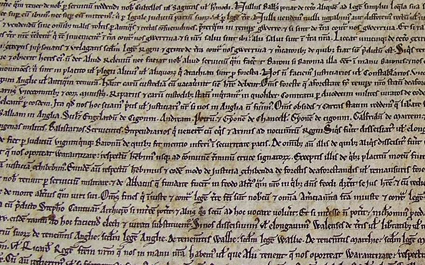 HISTORIANS are studying an edition of the Magna Carta that makes England French property from June.

Found in council archives, it contains an additional paragraph that says France can have England in 800 years’ time if the country is still a dump by then.

Historian Susan Traherne said: “If verified, this document means on June 15th we all become French, which I intend to mark by starting smoking again and having that affair I’ve always wanted.

“It’s not going to be an easy period of transition but people can console themselves with the spectacle of Nigel Farage losing his fucking mind.”

The key section of the document states: “Let it be agreed that England, its lands and chattels and peoples thereof, be surrendered unto the kingdom of France 800 years from the signing of this charter if it be shewn that the place still is somewhat of a shittehole”.

After June 15th, football fans will have to chant “No world wars but two world cups” when playing Germany and rectangular loaves will be made illegal.