Working Class Lottery Money To Be Invested In Kerry Katona

THE National Lottery can do more to benefit its predominantly working-class players by giving lots of money to Kerry Katona, ministers said yesterday.

Ms Katona will receive up to £10 million per month in used fifties, which she will be free to spend on saturated fat, Disney merchandise and unbelievably vulgar holidays.

Culture minister, Ben Bradshaw, said: "It's about time we thanked the working class for pissing their money away every week on an infinitesimally small chance of escaping their dreary existence.

"As an independent woman with the self-control of a hungry labrador in a sausage factory, Kerry is the perfect mascot for the modern prole.

"Nothing will please them more than seeing their heroine stuffing her face with massive gammon-and-prawn-spicy vol-au-vents as her and her checkout-girl pals drive around the country in a bright pink, stretch Hummer, singing drunkenly to Rhiannna and flashing their tits."

According to Camelot 98% of lottery players and 101% of scratchcard buyers are officially working class.

But previous lottery-funded projects have been criticised as too middle-class, including a 60ft sculpture of some brioche made from bits of the Guardian and a free, open-air ballet about searching for the perfect sun-dried tomato during that golden summer in Tuscany.

A spokesman for Katona said: "She's going to have her tits pumped up to the size of the Albert Hall, fill the English channel with Lambrini and then bob around in it hosting noisy 'Princess parties' on her knockers with free prawn bites and Akon as the guest of honour. Minted." 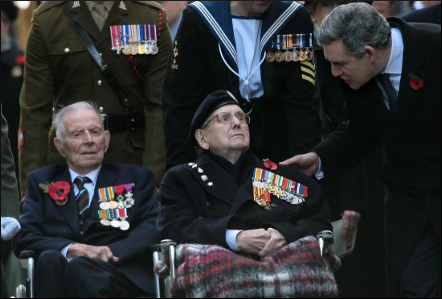 GORDON Brown is pinning Labour's re-election hopes on a strategy of dragging injured soldiers through the courts and trying to steal their money.

The prime minster has instructed the Ministry of Defence to make wounded servicemen beg for compensation in a move that he believes will wrong-foot the Tories and secure millions of votes across middle England.

A Labour spokesman said: "If there is one thing this country is absolutely sick of it is lazy, horribly injured soldiers lying around doing nothing all day except suffering constant pain and terrifying flashbacks.

"I think most people will be shocked to learn we have given them any money, let alone just enough for them to begin rebuilding their shattered lives.

"This is money that could be used to provide high-class prostitutes and Wii games for those unfortunate teenage boys who found themselves in a young offenders' institute after being forced to break into your house."

He added: "Everyone knows that when you join the army you can either choose to go to war or you can choose to stay at home and provide back-up in case of a fire brigade strike.

"And even if you do go to war you are under no legal requirement to follow orders, especially if they are really stupid and badly thought out."

The Labour manifesto is likely to propose a programme of ritual humiliation for injured soldiers in what opposition parties condemned as 'naked populism of the worst kind'.

The spokesman said: "We'll give you a couple of grand for a severed leg, but you are going to have to bring the leg with you, re-enact the explosion and be judged by a panel of celebrities before we write the cheque."