Young people should be forced to attend raves, say 40-somethings

BRITAIN’S 40-somethings have called for a form of National Service which would require young people to attend at least 10 raves per year.

Middle aged people who had it large in the late 1980s and early 1990s said it was vital for British society that young people aged 18 to 25 were forced to have it similarly large.

Tom Logan, 48, a veteran of the first wave of Acid House said, “My children need the short sharp shock you only get from spending all night necking E and pumping your fists to A Guy Called Gerald.

“They’re so docile and dead-eyed. I just want to tell them, why don’t you get off that sofa, switch off your iPad and go out and explore the countryside in search of an illegal all-nighter in the middle of nowhere?”

“You should hear the stuff my boys Kyle and Aaron are listening to them. Tunes, choruses, blah-blah – I tell them, ‘That’s not noise, that’s just music’.

“Call me old fashioned but music should be eight straight hours of 135 bpm riddims to the minimal squelch of a Roland 303.”

Norman Steele, who runs a rave boot camp in Bedfordshire, said: “I see kids coming in here – emos, would-be computer programmers, never danced in their lives, in bed by 11. After three months of intensive rave, you can see the change – they’re saucer-eyed and fully committed to taking it higher.”

The Mash guide to the lying bastards in the Trump administration 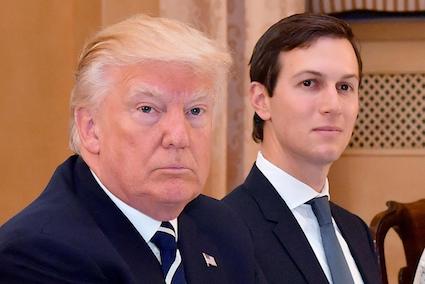 THEY’RE lying, they’re bad at it and one in three of them will serve prison time. But who are the people spinning the Trump administration’s web of fiction?

Donald Trump Jr. Primarily used as a bank of spare organs for his clonefather, Trump Jr met Russians who told him they could illegally influence the US election and believes that to be fine. Named ‘Most Likely To Be Assassinated’ in his high school yearbook.

Jared Kushner. Husband of Ivanka Trump, who the president takes full credit for, this New Yorker has lied to all the key figures in the course of passing on messages he did not understand and will soon be charged with perjury. Expected to serve six life sentences as official scapegoat.

Steve Bannon. Right-wing news editor not directly related to Trump but secure in his position as a fellow bloated sack of shit. Would glady see US overrun by Russia like in Red Dawn if it meant college girls stopped having blue hair.

Paul Manafort. Lawyer and Trump campaign consultant, has essentially been honest apart from failure to reveal he is a disguised Vladimir Putin.

James Comey. Former FBI director fired by Trump for investigating Trump, as simultaneously denied and admitted by Trump. Now roams the US, armed with nothing but a katana and six terabytes of compromising material on a hard drive, righting wrongs as a masterless ronin.

Ivanka Trump. Fairest in all the land, Ivanka claimed her attractive stepdaughter had been killed by animals in the woods but actually she lives. Also is in no way a fashion designer.

Donald Trump. From a psychological standpoint unable to lie because he believes every word he utters is holy truth, Trump has openly colluded with Russia and is incapable of covering it up. Will get away scot-free and appear on chatshows.