RACISTS are damaging the reputation of the British Army and undermining its mission to kill brown people, it was claimed last night.

A group of senior generals has written to the Times accusing the British National Party of 'hijacking the good name of the military' and insisting the BNP's extremist values are at odds with the Army's values of thinking up funny names for foreigners and flattening their houses with a tank.

The letter, signed by Sir Alfie Allendale, Sir Binky Beaver, Sir Chippy Chappell and Sir Dandy Dinmont, stated: "The Army has a proud tradition of interacting with all manner of brown people before persuading them to give up their land while dealing sensitively with their concerns by shooting them fairly and squarely in the middle of the face."

It added: "To suggest Britain's unquestioning pride in its army and nostalgia for the empire it so brutally maintained somehow contributed to the mentality that created organisations like the BNP is so completely ludicrous that it must never be discussed in any way, shape or form."

Major Nathan Muir, deputy director of inter-racial harmony at the Ministry of Defence, said: "The vast majority of Britain's soldiers are proud and enthusiastic multi-culturalists.

"I have lost count of the number of young privates who have told me that when they leave the service they want to work for the Equality and Human Rights Commission helping Bangladeshi women to fill in benefit forms."

Captain Stephen Malley, currently based in Helmand province, said: "At the end of a hard day in the field my men like nothing more than to crack open a bottle of Cloudy Bay and discuss their favourite Guardian columnists.

"Wee Jimmy Jamieson is a big fan of Polly Toynbee, though he does say she can be a bit too reactionary at times, while Sergeant Major Douglas has a beautiful signed poster of George Monbiot on the inside of his locker."

He added: "Just last week, as we went into action, Jimmy shouted 'alright lads, this one's for Shami Chakrabati!'" 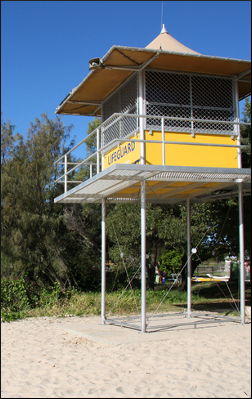 A BRITISH tourist last night described the moment he was attacked by Danni Minogue while diving off the coast of Northern Australia.

Wayne Hayes, 23, from Peterborough, was spending a weekend snorkelling in the Great Barrier Reef as part of his year-long effort to avoid getting a job, when the small but powerful Minogue sank its teeth into his right leg.

He said: "I was poking at a venomous fish and Gibbo, my diving instructor, was pretending to wank a sea-cucumber, when I saw this dark shadow moving out of the corner of my eye.

"I thought it was a Conger eel but then I noticed it's badly co-ordinated outfit. My blood just froze, – I knew it was Dannii Minogue.

"I looked across at Gibbo and we both immediately realised we weren't going to get out of this without at least getting taken down a peg or two, or accused of being benders."

Mr Hayes added: "I readied myself for the attack as best I could. I knew from TV programmes that it would probably just regurgitate whatever Louis Walsh had said, but nothing could prepare me for what happened next.

"I remember everything going into slow motion. I felt this tug on my leg and I tried to kick it in the snout. The sea turned red and I saw part of my calf muscle had been ripped off. I was losing a lot of blood and going into shock."

The diver and instructor eventually managed to climb aboard their boat where they raised the alarm and were airlifted to a local hospital. Mr Hayes said: "When we span Mother Nature's boundaries we must come face to face with the terrifying beauty of death. The sea is Dannii's territory."

The Dannii Minogue is a bottom-feeder usually found in the colder waters of the English coast, where it feeds on the bottoms of terrible singers with low self-esteem.

Marine zoologist Tom Logan said: "The Dannii can be distinguished from its more amicable sister by its cold, calculating expression and utterly infuriating voice. Whilst it's not unattractive per se, the fact that it's such a cow makes it about as endearing as a gang of Nazi wasps."