RAF To Bomb Peterborough Back To Stone Age

PETERBOROUGH was today bracing itself for wave after wave of devastating raids by low-flying Tornado fighter-bombers.

The historic cathedral city has been targeted by RAF chiefs after air force personnel were called names by some students.

Air Chief Marshall Sir Tom Logan said: "Our brave airmen have been subjected to ill-considered taunts from some of Peterborough's most fanatical and determined Guardian readers.

"We could simply ignore them and go about our business, but that would send the wrong message to our enemies in Iraq, Afghanistan and France."

The raid will be carried out by a formation of six Tornadoes each carrying a 200 pound Geronimo, laser-targeted bomb, also known as the 'Cathedraliser'.

Many people have already evacuated, although a Guardian-reading hardcore has pledged to shout incisive criticism at the planes as they unleash fiery death.

Sir Tom added: "Thanks to the cutting edge technology of today's RAF, this charming, provincial city with its treasured medieval architecture will be a smouldering husk by around tea time.

"Peterborough has made its date with destiny. I would strongly advise its citizens to flee to Grantham. If you're going via the A1, there's a lovely tearoom at Woolsthorpe."

Public Toilets To Be Replaced With Actual Cottages 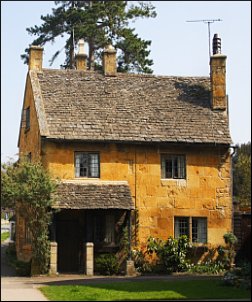 PUBLIC lavatories across Britain are to replaced with three bedroom cottages in a bid to make furtive cock action safer and more comfortable.

A backbench committee of MPs has supported the move after receiving complaints from 'hundreds of anonymous constituents'.

Denys Hatton, MP for Minchinhamptonsteadbury, said: "With the right level of investment we could create illicit sex dens that will be the envy of the world.

"Each cottage will contain three bedrooms for hot private sessions and a cosy living room where you can have a relaxed chat with your new chums.

"There will also be a delightful little kitchen where you can make yourself a refreshing cup of tea between bouts of sleazy cock fun."

The new cottages will also house a row of urinals and cubicles for those who may be nostalgic for the days of grubby bum sessions filled with the aroma of bleach.

Wayne Hayes, a 43 year-old illicit sex enthusiast, said: "Too many of our great Victorian public lavatories have been sold off and turned into private housing.

"Unfortunately many of the new owners do object when you write a note on their wall saying how much you love to suck big, fat dicks."