Miracle Cat Knows When Old People Are About To Be Racist 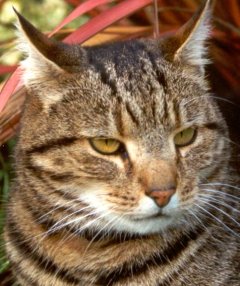 MOLLY, a tabby cat at a Bournemouth nursing home, has displayed an uncanny ability for identifying elderly racists.

Staff at Bellingham Lodge say the four year-old cat will jump into the lap of one of the elderly residents, usually during the six o' clock news.

Assistant manager Susan Carter said: "Anything on the news about terrorism, asylum or immigration will have Molly pacing around the floor.

"As soon as one of the residents says, 'it's because of all these…' she jumps into their lap. It's as if she can sense their racism.

"If George Allegiah is presenting the news, then Molly can get quite agitated as the racist remark could come from anywhere in the room."

She added: "Last year we had one old gentleman who was a Conservative candidate in the 1983 general election. Molly would follow him everywhere he went."

Staff say they are surprised by the large number of women caught out by Molly's sixth sense for bigots.

"Our old ladies do love to have a go at ethnic minorities and foreigners," said Carter. "I think it helps the swelling go down in their legs."