Boss demands complete professionalism from everyone except himself

A MANAGER who requires staff to be completely professional sees no contradiction in buggering off to take his car to the garage, it has emerged.

Head of purchasing Roy Hobbs regularly upbraids staff over minor issues of dress and timekeeping, but then disappears for half the afternoon to take his car in for an MOT.

“Yesterday he had a real go at Emma because her train was late, then he shut himself away for two hours to choose a new company car.

“Once we were working flat out on a big order and Roy was barely off the phone. I thought I’d got the wrong impression about him but then I realised he was organising a lads’ trip to Madrid.

“Also if we go to the pub on Friday it’s frowned upon, but it’s fine for Roy because he goes to a restaurant with one of his management buddies and calls it a strategy meeting.”

Hobbs said: “My role is to provide leadership, not get bogged down in day-to-day stuff. I’m like the captain of a ship. Which reminds me I must go online and look up canal holidays.” 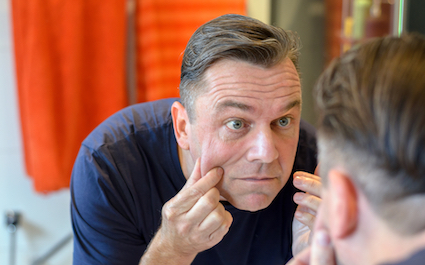 A 43-YEAR-OLD man doing a detox to feel better has admitted that, 11 days in, it appears to be doing absolutely fuck all.

Tom Logan has given up alcohol, cigarettes and recreational drug use for January but is still confronted with a knackered ghost with bags under its eyes when he looks in the mirror.

He said: “I should be feeling some improvement by now, shouldn’t I? A little bit?

“On January 1st I felt so dreadful that I decided that was it, I’d stop punishing myself and stop feeling so exhausted and moody and depressed all the time, because that’s the booze that does that.

“I thought ten days in, all the poisons will be making their way out of my system and I’d be bouncing out of bed, raring to go, fresh-faced and full of natural energy.

“But instead I feel just as awful except now the evenings last forever and I’ve got nothing to look forward to. Oh and it turns out the wife and I don’t get on.

“I’ll give it until the 19th, but if I’m not feeling and looking at least ten years younger by then I’m getting shitfaced.”