Having spent the morning scrolling through Twitter, marketing executive Kelly Howard eventually became productive during an afternoon Zoom meeting in which she created her masterpiece.

Speaking of her artwork, she said: “We were into the second hour of a nonsense meeting about brand optimisation or something, and I completely zoned out and decided to doodle Leonard, my cat.

“I was always shit at art in school, but I think I managed to capture Leonard’s wild, temperamental essence. And you can definitely tell it’s a cat.”

Howard is certain that the 53 minutes or so she spent on the drawing constituted her greatest professional accomplishment of the day.

She continued: “Actually, I’d go as far as to say it’s probably the only worthwhile thing I’ve done all year. Maybe I should pack in marketing and become an artist full-time.”

Because I'm worth it, by Priti Patel 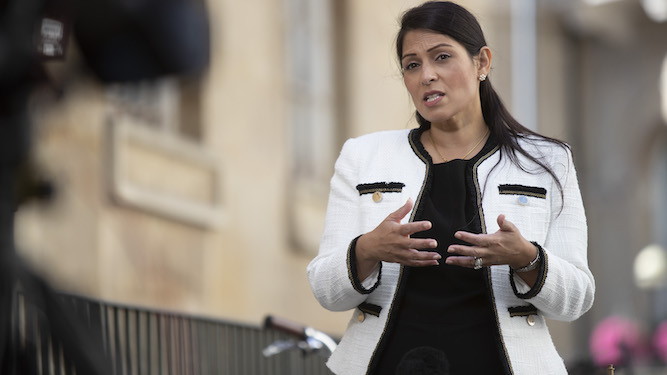 Because I’m a maverick. I make no apologies for that. Like Crazy Riggs or Mel Gibson, I don’t play by the rules. I intimidate, I’m responsible for countless cases of constructive dismissal, I got fired for breaching the ministerial code. But I get results. Just don’t ask me to name any.

Because I’m diverse. Ethnically I’m Indian, my family’s from Uganda, and I’m horribly right-wing. Do you know how much that f**ks up Guardian readers? How powerless they feel when I go on a vicious diatribe against immigrants? I’m having a good smirk just thinking about it.

Because I hate the EU. I’m not some wishy-washy former Remainer like Hancock. I despise that filthy hive of languages and accents and cuisines. Britain won the war therefore the whole continent should be British and speaking English. It’s a direct insult that they still exist.

Because I hate you. Not like those Etonians. They don’t know you. But I grew up among you and know lots of you are happy to suffer so long as people you hate are suffering too. And I’m totally happy to oblige with that.