'Go to the factory and ask': a grandparent's guide to finding a job

UNEMPLOYED? Made the mistake of admitting this to your elderly relatives? Read grandparent Roy Hobbs’s guide to thriving in a depressed job market:

Don’t bother with a CV

I left school at 16 with a reference letter. Never needed a CV, and most people running companies are my generation so they’ll agree completely. A smart suit, a tie and a firm handshake are worth far more than an accurate precis of your career and a ‘Linkedin endorsement’, whoever Link Edin is.

Go to the factory and ask

Don’t wait for jobs to be advertised. By that time they’ve already gone. Have you considered popping down to the tyre factory in town and asking if there’s any work going? It was closed and outsourced to Bangladesh in 1992 but you never know if you don’t try.

Tell everyone you know you’re looking for a job

Your grandparents will be doing this on your behalf like I do for mine, but it doesn’t hurt to spread the word. Tell everyone you meet — the GP’s receptionist, strangers at the bus stop, small children — that you’re out of work at the minute. Doris from the bingo’s son might be head of human resources at Google, you never know.

Get down the labour exchange

’Back in my day, I left a job I didn’t enjoy in the morning, went down to the labour exchange at lunch and started a new job by the afternoon.’ If this blatantly bullshit 1960s story doesn’t inspire you to queue up outside Job Centre Plus in the hopes of getting your benefits stopped for a zero-hours temp job, nothing will.

Offer to work for free

Getting your foot in the door is the most important thing. Worry about rent and food bills later. Don’t fuss about health and safety, you don’t want them thinking you’re soft. Get going on the welding equipment and if you don’t horribly maim yourself they might keep you on. 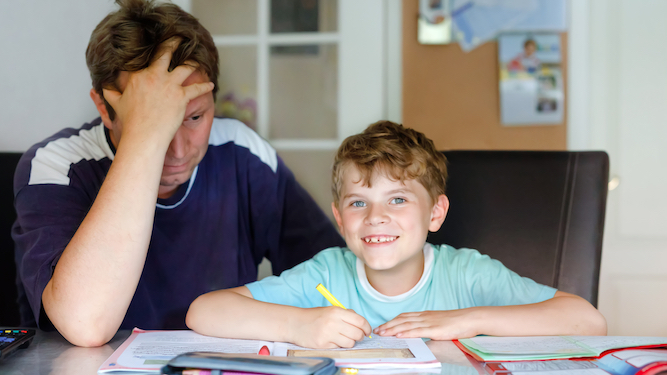 THE return of homeschooling has once again seen educated, high-earning professionals wondering if they are actually shit-thick. Take our quiz and find out:

What is a fronted adverbial?

A) A sexually transmitted disease
B) Some bollocks in a sentence
C) A cocktail that stops you talking. I’ll go and check the liquor cabinet quickly and see if we’ve got the ingredients.

Jordan, Max, Sue and Sally buy 203 sweets. Max has three-twelfths of them. Jordan has two-sixths. Sue has one-third. What does Sally have?

A) Morbid obesity
B) Some fraction shit that basically means ‘the rest of the sweets’
C) Sweets, there’s an idea. I think there’s still half a tub of Roses in the garage

What causes us to feel the force of gravity at the earth’s surface?

A) Magnetism. Sexual chemistry. The Force, from Star Wars?
B) Something to do with an apple falling off a tree onto Isaac Newton
C) Let me finish this Fronted Adverbial and I’ll come back to you. Mmm, moreish

What is a subordinating conjunction?

A) A slip-road off a motorway
B) Yet more bollocks in a sentence
C) You know who’s good at teaching? Alexa, probably. Alexa, take over. I’m f**king done.

Mostly As: Yes, you are thick. But this is the age of the thick, so expect to appear on Newsnight within the fortnight.

Mostly Bs: Good news, you have the IQ of a six-year-old. Watch back-to-back BBC Bitesize until March and you’ll be up to the intellectual standard of Year One.

Mostly Cs: The school is clearly having a laugh and sent out material from Oxford, Mensa and NASA’s internal training programme. So it’s not your fault. Have another Fronted Adverbial.