How to win at office politics from home

ARE you locked in a video call power struggle with your colleagues? Here’s how to navigate the nest of vipers you work with from the comfort of your own home.

Start destroying your co-workers’ self-confidence by making sly digs about their patterned feature wall and uninspiring bookshelf. Try something like “Anyone who’s still reading The Girl On The Train in 2020 is clearly a bit of a plodder” and go from there.

Perception is key to getting ahead in a cut-throat office environment. Make a strong impression with a Zoom background like Tony Montana’s coke-heaped office in Scarface and avoid something nerdy like the Emperor’s throne room from Return of the Jedi.

Bitch when your mic’s still on ‘accidentally’

“Lucy’s presentation was a shoddy piece of rubbish, wasn’t it? The sooner we let her go the better. Oh, can you still hear me, Lucy? Oh God, how embarrassing. Would you like me to email over your P45 once you’ve finished drying your tears?”

Providing edible treats is as important as smashing your KPIs in the third quarter when it comes to securing a promotion. Show the pathetic lengths you’re willing to go to by posting cakes to your boss then casually mentioning it in the next video call so everyone knows who’s the top dog/creepy crawler.

If you’re falling behind in the power dynamic simply mess up big time and bankrupt your already struggling business. Soon you’ll be competing with your ex-colleagues for one of the precious few remaining jobs, but you can use the same devious tricks in a group video interview. 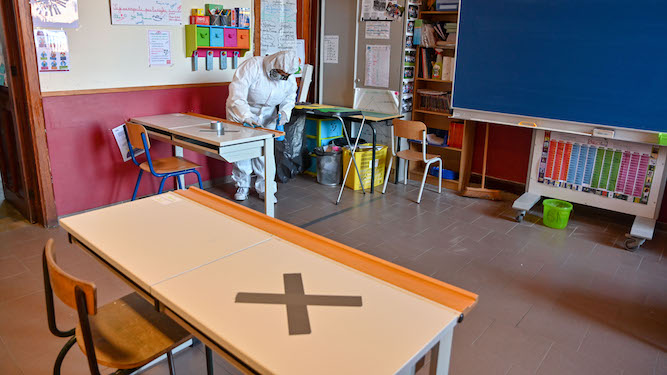 THE government has outlined its new half-arsed rules for reopening schools which are impossible to follow and will be ignored. But what are they?

Start times to be staggered

A series of cleverly staggered beginning and leaving times will mean no contact between pupils, apart from those with older and younger siblings which is a mere all of them. Those children will hang around outside school fighting and pissing about as per usual.

Pupils to face front at all times

All pupils are to face forwards for six straight hours like soldiers on parade, never looking left or right at their classmates, never making jokes, never eyeing up boys they fancy or passing notes or behaving like human beings. Yeah, f**king right.

Primary schools to have bubbles of 30 children

Secondary schools to have whole-year bubbles

Entire years at secondary school will be taught within the same laughably overcrowded buildings but miraculously never see each other or even know the other years are there. COVID-19 will be asked not to linger in the air or on surfaces to respect this rule and is expected to agree.

Mask-wearing will not be compulsory, but the bullying of any child who wears a mask will be rigidly enforced by peer groups. Expect the upper branches of trees to be festooned with them by the end of the first break.

Teachers are f**king hilarious already, because they’re old and weird-looking and expect you to listen to them. Add a face-shield that mists up when they get angry and which balls of spit-moistened paper will adhere to, and there is no hope for any discipline whatsoever.

Private schools to be fine