VISITORS are sharing photos of the eerily deserted pages of LinkedIn as everybody gives up on bullshit self-promotion and settles for the job they have.

The social media site is down to mid-00s levels of peace and quiet, following widespread agreement that now is not the time for wanky posts about the fast-paced world of some career that really doesn’t matter and in which there are no new jobs anyway.

“Everyone’s so focused on holding onto their current position that my news feed is no longer polluted by video of someone on stage at the Brentford Data Storage Conference or listing a new invented skill.

“The once-deafening cries of recruitment consultants have been silenced. The bellows of consultants are no longer heard. It’s almost a pleasant place to be.

“I just hope that when all this is over we can learn some lessons and go back to using LinkedIn for its original purpose: checking out ex-colleagues who we always fancied. Or hated. Or both.

“Sod goats occupying Llandudno or fish in Venetian canals. The sense of hope I get from this is a million times stronger.” 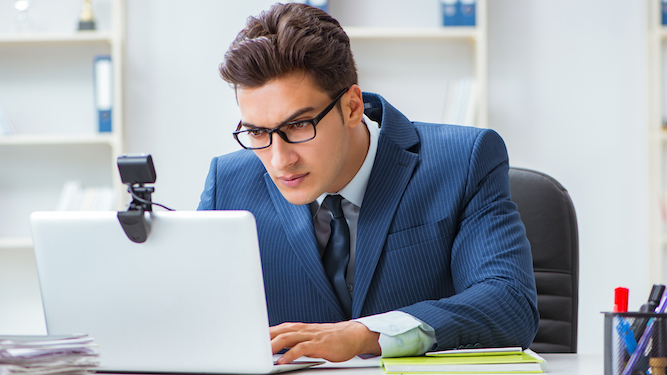 A DEEPLY unhinged junior accountant is staring directly at his laptop’s camera throughout the Monday morning Zoom meeting, colleagues have confirmed.

Tom Booker unsettled co-workers by maintaining a fixed, unblinking gaze throughout the video conference rather than looking at images of himself, his co-workers, or the phone on his lap.

Boss Nikki Hollis confirmed: “He stared down that camera like he was devouring our souls with his eyes. It was like he was looking directly at us.

“Not a second was spared to look randomly upward into a corner, or to flick around at whoever was speaking, or to glance at someone off-camera entering the room who’d forgotten about the call.

“His eyes burned out of the screen like fiery coals. I’ve seen hostage videos that were less intense. He looked like he should have had an AK47 across his lap.”

A spokesman for Zoom said: “Our service is not for people to attempt to make eye contact. The camera is only there to show your boss that you have clothes on.”