WORKING from a cafe? Trying to convince yourself it was a good idea? These are the reasons it wasn’t:

The tables are the wrong height, the wrong shape and wobbly, so you’ve already spilt latte on your laptop twice. And after a day on a high stool, a hard chair, or a sofa with zero lumbar support your back will be killing. It’s as if they don’t even want you to spend an eight-hour working day here.

In a normal working day 50 per cent of your brainpower is consumed mulling over what snack you’ll have next. In a cafe that goes up to 85 per cent, but you can’t satisfy your cravings without facing the barista’s judgement as you order four giant cookies, two slices of carrot cake and a tuna toastie.

You fell asleep watching First Dates last night and your laptop has 13 per cent battery. The only plug socket in the cafe is being used by a smug bastard playing car racing games on his iPad with the sound up. You’re so worried about your dwindling charge you can’t concentrate on your work.

You’ve escaped your own kids but that doesn’t protect you from other people’s. And whether they’re lobbing sugar packets at you or singing along to Mr Tumble, you’ll wish they were your kids because then you could scream at them to shut the f**k up.

You’ve ordered four bucket-size coffees; there’s no way you’re making it through the morning without a toilet trip. Make sure you take your laptop with you to pick up the scent of ‘eau de Starbucks shitter’, a potent combination of human waste and cleaning fluids. There is never a window.

You honestly think it’s not weird to hammer away at a keyboard and take calls on a wireless headset in a space intended for people to drink hot chocolate? Bemusement, pity, contempt: you’ll attract the full range of glares. But it’s better than the only face you see being your own dead-eyed reflection. Hatred has become valuable human contact for you.

Loser student joins all the societies 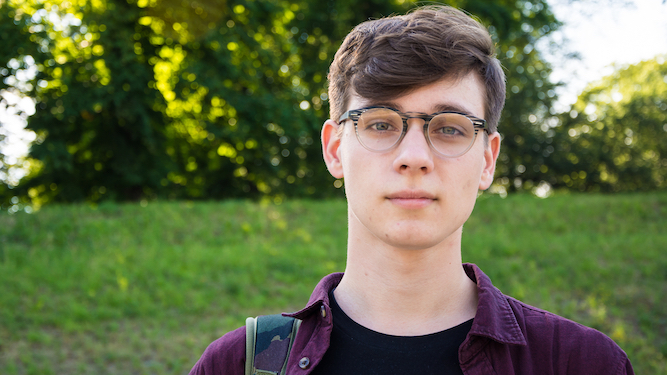 A CREDULOUS loser of a student has signed up to all the societies at his university’s Freshers’ Fair.

He said: “They all had their own stall and I worked my way round them in a methodical fashion to make sure that I didn’t miss any. It’s all part of the Freshers’ Week excitement.

“I had no interest in rowing but they were very persuasive, the Christians were such lovely people, and those hippies tell me hemp is amazingly versatile. I’m sure I’ll make lots of new friends by participating in randomly chosen activities.

“Once I’d finished I sipped a non-alcoholic beer in the Student Union by myself, then got into bed by half-eight so I would be refreshed and ready for orientation tomorrow afternoon.”

Surf Society head Oli O’Connor said: “We thank Mr Browne for his signing-on fees and monthly direct debit, which we promise to spend on doing all the good stuff our societies are dedicated to and not inviting him.

“He has cemented his status as the least cool student on campus and we have circulated his name to all pubs, bars and nightclubs so they know never to let him in.”