SHAKESPEARE AND CELESTIAL DARTS
It’s been a bit boring around here for a few weeks. We havenâ€™t had any exciting newcomers so I’ve been hanging out with some of the veterans for a change. Shakespeareâ€™s been teaching me how to play darts and I’m entered into a tournament next week. Darts is a bit different up here – this is Heaven so it’s obviously well fucking better.

For starters, the board is a rotating sphere rather than a circle and the darts come out of your fingertips like lasers. The numbers go up to 385 and there’s certain hidden numbers that fire nectar bombs into your eyes when you hit them. The object of the game is to avoid being blinded by nectar.

So it’s sort of like Earth darts only better. But Shakespeare’s shit hot at it and he’s a good teacher. Now we just need to find a way to beat that fucker Ray ‘The Lord’ Charles.

THIS SPECTRAL PERVERT JUST WON’T GIVE UP
I’m still being intensely wooed by Gary Coleman. The pint-sized pervert has got his sights set on getting me in the sack and there’s been no letting up this week.

He’s sent me a quilt covered in love poems that he got some angels to do for him. It’s not perfect though – right at the bottom, he’s done a drawing of himself in purple felt tip. Given himself a massive cock and balls as well. If that’s anatomically correct, I’m amazed he can even stand up.

Rumour is that he’s hoping to try out a new invention that Michael Jackson has been working on in his lab. It’s a fake flower that squirts Rohypnol gas into your face when you sniff it. I’ll be watching out for that one.

ANIMAL MAGIC
The Big Man’s finally going to dump 10 tons of seagull shite in Richard Dawkins’ back garden and he’s asked me to pull the lever. I can’t fucking wait. 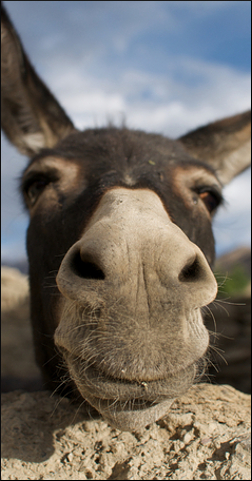 A STUNT involving a terrified parachuting donkey left children disappointed by the lack of death, it emerged last night.

Organisers of the event, which took place on a newly-opened Russian beach, have been accused of wilfully underestimating the innate evil of the average under-12 after the animal miraculously survived its fall.

Parent Stehpen Malley said: “When I told my kids some men were chucking a live donkey out of a plane, they shouted ‘sold!’ and started leaping around in an endearingly bloodthirsty way, like wicked goblins who had just been promised a unicorn burger.

“Logically they assumed they would be witness to a gruesome animal fatality. So you can imagine how their homuncular little faces dropped when the creature landed with only minor injuries.”

Six-year-old Stephen Malley Jnr said: “I like donkeys and I bet they explode really well. It’s okay to break animals because according to my teacher they don’t have souls.”

He added: “My teacher sometimes says that I don’t have a soul either.”

Eight-year-old Nikki Ellis said: “I don’t know why the men dropped the donkey out of the sky. It would have been more fun if they made it eat lots of metal carrots and then picked it up with a big magnet and dropped it into a pit of hungry tigers and snakes.

Child psychologist Carolyn Ryan stressed: “Exposing young children to public acts of animal cruelty is a very dangerous thing to do. It’s the kind of experience that will make them grow up to become writers on Hollyoaks.”