The veteran manager masterminded Cole’s Â£90k-a-week contract but has been seen giving him Â£5 and telling him not to tell his mother.

The money was apparently handed over on the understanding it was to be spent on a book about the Royal Navy.

Hodgson said: “They all seem lovely here and my room’s right next to the conveniences. But the main thing is having family like young Joseph around. I remember when he was this big and I was wiping his bum for him.”

He added: “I used to manage that Fulham, you know. Way before you were born, I imagine. Of course in those days they were called Fulham Academical Sporting Club and all the players were gentlemen who wouldn’t dream of cheeking the ref or raising his hat to another player’s wife without permission.”

Although Hodgson is understood to earn significantly less than predecessor Rafael Benitez, the club has been faced with the added expense of putting handles next to everything and fitting Anfield with 1200 yards of stairlift.

After capturing Cole, Hodgson’s other targets are believed to include Sir Stanley Matthews and Albert ‘the Motor Car’ Perkins, the only Englishman to score a hat-trick at Wembley, a century at Lord’s and bag a dozen fuzzy-wuzzies at the Seige of Tebbit’s Drift.

Liverpool chief executive, Christian Purslow, said: “We still think we have the right man for the job despite the odour and the constant shouting.

“And we’re all looking forward to the first match against Man United, not least because the two dugouts are going to look like Statler and Waldorf, but with a lot more c-words and Glaswegian-ness.”

Stonehenge May Have Been A Henge Showroom, Say Experts 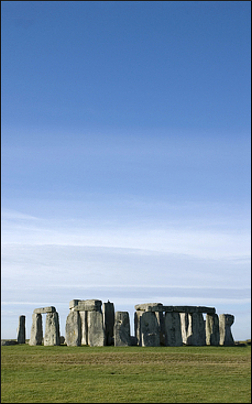 THE discovery of a second henge at Stonehenge has led to claims that the site may have been a showroom for henges.

The new henge was discovered 900m from the world famous original and carried a price tag of 460 cowpats.

Professor Henry Brubaker, of the Institute for Studies, said: “I’d imagine in future years we’ll discover at least a dozen more henges in the area, all with their own pricetags and perhaps even payment plans.

“What’s not clear is whether these henges were display models, like a fitted kitchen at Homebase, or whether the customer actually took the henge away with them, like it was a car or a new sofa.

“If they did then we should be able to find a series of very deep tracks caused by 40 ton lumps of stone being dragged towards some of the early middle-class hut developments near Warminster.”

He added: “I’d imagine the customers would have been offered a cup of diluted goat’s urine or some fresh mud and then shown around the henges as the salesman demonstrated various features such as its ability to stay up and how good it was at casting shadows in a mystical way.”

Tom Logan, professor of ancient consumer history at Reading University, said: “The documentary evidence tells of travelling merchants who would knock on your door just when you were having your dinner and tell you that they were in the area and that your hut had been one of only three that’s being offered a top-of-the-range show-henge ‘for the new brochure’.

“You’d then sign up for what was supposed to be a free henge, but before you know it you’d be hit with a bill for at least 300 cowpats, possibly more if your henge had one of those bits that sat on top of the other bits.”

He added: “It’s a fascinating insight and it shows that our ancestors were just as good as we are at spending borrowed cowpats on shit they didn’t need.”