BECAUSE of these rumours that I might be coming back to play in the Premiership, people are asking me what I miss most about England. To be honest there’s lots of stuff I miss: sandwich spread sandwiches on medium white sliced bread with margarine, not butter – I don’t like butter, because it’s too salty and I don’t like salty things.

Another thing I miss is Orange squash. I don’t like too much squash in my squash because if you put too much in it makes it too sweet and I don’t like things are that are too sweet, although funnily enough I do like Fondant Fancies, which are really, really sweet. I think it has something to do with the amount of sugar they put in them.

I’ve just thought of another thing I miss – Ready Brek. You can’t get Ready Brek in Italy, Spain or America which is a shame because I really, really like it. I don’t like it too thick, though. I also don’t like it too thin, neither. At the end of the day I like it somewhere in-between thick and thin, if you know what I mean. I also don’t like it when it has too much sugar in it. Even if I did have Ready Brek in the house Victoria wouldn’t make it for me because she says it “looks like fucking wallpaper paste”. I wish she wouldn’t say the f-word so much. Victoria said it when Paul Scholes was round here playing X-Box with me one time, which made him do a cry.

Just to put the record straight, I never wanted to call our kids Cruz, Romeo and Brooklyn. I wanted to call them ‘David’, ‘David’ and ‘David’. Basically, it’s a sort of tradition in my family, especially when it comes to boys. Obviously, at the end of the day, I’m called David. My Dad’s called David. His Dad was called David, my great, great grandfather’s name was also David. Oh yeah, and my Aunty Valerie changed her name to David when she eventually came back from Thailand. So you can imagine my disappointment when Victoria put her foot down with a firm hand and said: “There’ll be no more Davids in this family, David.” If we have little girl this time I’d like to call it Jane, or Colin.

Iâ€™ve just remembered something else I love about England that you don’t get abroad – the internet. When I left Man United seven years ago, me and Victoria had just gone ‘online’. It was brilliant. Sometimes, I used to email Gary Neville to see if heâ€™d like to pop round for a Nesquik and a game of snooker, and he used to send me one back saying â€œyes I would love to come around and have a Nesquik and a game of snooker”. I tried to get the internet when we was abroad, but Victoria said it hadnâ€™t been invented in the rest of the world yet. She also told me that if the internet did exist in Spain, Italy or America it was probably full of dirty pictures of nudie ladies and people writing horrid, nasty lies about one of eating disorders Victoria has never suffered from.

92% think they could do better art than Damien Hirst 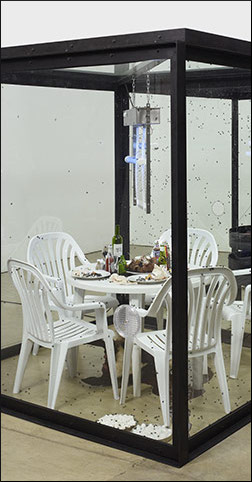 MORE than 90% of Britons have an idea for some art, it emerged last night.

As Hirst was applauded across North London for putting some patio furniture in a glass box, across the country thousands of people said that was basically their conservatory.

David Bingham, an accountant from Surrey, said: “My sister can draw anything – bananas, tanks, even horses.

“Horses are incredibly hard to draw, but her work only fetches Â£5 at craft fairs. It’s annoying because in a draw-off I think she’d beat Damien Hirst by about 20 minutes.”

He added: “Art prices should be based on skill. Michelangelo was really good at chiseling, Banksy is excellent at sneaking around and David Hockney uses colour in a deceptively simplistic way that draws you in even as it repels you.

“What’s Damien Hirst good at apart from being a cheeky prick?

“I read that he got $17m dollars for some pills in a box. I had to double check to make sure I wasn’t having one of my crazy cheese dreams.”

Meanwhile Hirst is shocking and delighting audiences in Hong Kong with a smaller version of the diamond skull that he got some other people to make for him after Keith Allen phoned up drunk one day and said ‘you should totally glue a load of diamonds to a skull’.

Bingham added: “I’ve made this marionette thing out of left-over gammon. It’s called Meat Puppets and it’s yours for Â£486,000.

“If you like, I can put it in my conservatory.”