Stop right there. I don’t want to hear any more of this claptrap that a movie is a film – a film is the correct term for a feature. Film is British, it’s Norman Wisdom being dragged across a garden by a dirty-great lawn mower, Christopher Lee dressed like a big Jessie in The Wicker Man and perhaps most memorably, British film is summed up best by Trevor Howard and Celia Johnson chomping on crumpets in a station buffet, resisting an almost uncontrollable urge to make the beast with two backs.

You must never forget the fact that if Hollywood execs had their way, Brief Encounter would be remade as a blockbuster consisting of Bruce Willis shagging the living daylights out of Keira Knightly in an airport toilet, after wiping out a small army of terrorists with foreign accents you can’t quite place: so don’t tell me it’s right, because it’s wrong and I for one want nothing whatsoever to do with it…which is why we as a nation have to preserve our precious cultural heritage by carrying on calling “movies”, “ films “.

I was eating my Golden Grahams at the breakfast table the other day, when something I saw in the trade paper Variety nearly made me choke on the darn things. Apparently, Hollywood studio chiefs are thinking of remaking the greatest film ever made – ever. For those of you bone-headed enough not to know what I’m talking about, it’s of course the brilliant William Friedkin masterpiece from 1973, The Exorcist.

Anyway, I read that they’re going to remake it, only this time the central role so memorably played in the original, by Linda Blair, is to be reprised by Charlotte Church. Now, I’m not one to bear a grudge, in fact I like to think of myself as a fair-minded and peace-loving individual, but as I was sealing the envelope addressed to Head of Production, Time Warner, containing a medium-sized vile of anthrax, I must admit thinking to myself, ‘ there – that’ll teach you’.

You may think that because I’m a critic, that I might find it impossible to enjoy the act of simply watching a film – well, all I can say is, how wrong  could you be! Just the other day, I went into my local Blockbuster to rent something. My attention was immediately taken by the ‘New Releases’ section to my left. So I walked over and began sifting through what was on offer – needless to say, there was scant choice. Okay, I’m going to be quite blunt with you – these places are perfectly okay if you’re into watching Jim Carrey pulling stupid faces and farting, watching The Rock ripping people’s limbs out of their sockets or Sir Anthony Hopkins phoning in another of those dreary, mid-Atlantic performances.

Don’t get me wrong – there’s a place for these type of films, and of course, there’s a place for people who enjoy watching them. But – and this is a very big ‘but’ – don’t expect me to watch them – and even more to the point, don’t expect me to breathe the same air as the people who are fans of this chewing gum for the eyes, that’s all. Anyway, as you can imagine, I left Blockbusters empty-handed that particular night, whereas the man behind me in the queue was obviously going to leave the place empty-headed – something I’d gauged when he’d selected a film featuring Jason Statham smoking cigarettes and punching people.

My significant half and myself were invited round a friends house the other night for some drinks – all very convivial, you may think ? Sadly, the couple we were visiting insisted on showing us the home movie they made during their recent European holiday. As I munched on the party food so kindly provided by our hosts, I couldn’t help but noticing a few celluloid discrepancies, not only in technical, but also basic story-telling terms.

It’s difficult to pinpoint exactly when the atmosphere became soured – my guess is sometime between the moment I started making some brief notes and when Graham, the ‘director’, pinned me to the floor and promised to ‘kick my fucking teeth in’. In hindsight, I believe he’ll look back at this as a slight over-reaction to what was a fair appraisal of a film which contained what must be said were wooden central performances, a wafer thin storyline and a lack of narrative drive which made this particular punter want to do something more stimulating, like doing an inventory of my sock drawer.

Giant Magnifying Glass Revealed As Cause Of Global Warming 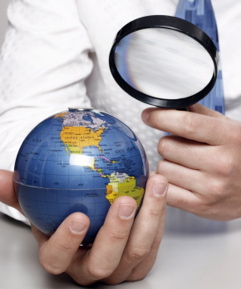 SCIENTISTS have discovered a giant magnifying glass above the Earth which they think is the main cause of the global warming the planet is experiencing today.

The enormous lens is floating in space some 45 million miles from our planet and is heating up the Earth by focusing the Sun’s rays on its surface.

However, Professor Wayne Hayes, head of astronomy at Glasgow's Clyde University, said the Earth could easily be saved from the devastating effects of further overheating by simply “blowing the fucker up”.

Prof Hayes said: “It may seem incredible that no one has spotted it before, but we only discovered the biggest cocking planet in the Universe earlier this week, so it's no surprise really.

“Anyway, now we know it’s there we can easy smash it to bits with a great big fucking missile and then just get on with our lives as normal, without having to heat our houses with our own farts, or whatever else it is we are supposed to do these days.”

George Monbiot, the leading climate change activist and regular guest blogger with the Daily Mash, said he was “overjoyed” to hear that global warming was nothing to do with the human race or its modern lifestyle, and vowed to scrap his “crappy bike” immediately, and buy himself a new Jaguar and an Aston Martin “straightaway”.

The veteran campaigner said he had celebrated the discovery of this simple technological solution to the planet’s global warming problem by booking two first class return flights to Nice so he could go fly to his cottage in the South of France, instead of having to walk as usual.

He said: “I can’t described how relieved I am to hear this news. I can’t even sit in a taxi these days without someone calling me ‘a fucking hypocrite’. It will be the first time in years I’ve been able to sit on a plane without wearing a false nose, a stick-on beard and a dress.”

Attention in the scientific community has now shifted onto the question of who put the magnifying glass above the earth in the first place. "Early evidence pointed towards Ming the Merciless, the evil ruler of the planet Mongo," said Professor Hayes. "However, it now appears that it was in fact Friends of the Earth. How ironic."