How to make your own 'Bradley Wiggins' sideburns

British hero Bradley Wiggins is almost as famous for his cool Mod styling as his pedalling ability. Here’s how to recreate the cycling demigod’s trademark facial fuzz without waiting for tedious hair growth.

A generous handful of pubes

A bowl or similar receptacle for the pubes

Remove your trousers/skirt and underwear (if you’re doing this at work, you may want to stay decent by simply pulling down your pants low enough to expose pubic hair).

Cut off your pubic hair, taking care not to slice into your genitals.

Using both hands, mix the pubes together in a bowl. This vigorous tousling bonds them and creates volume.

Cut two pieces of double-sided sticky tape into the L-shape of sideburns, then place them into the bowl of pubes and swish them around a bit until they are completely covered in hair.

Attach the non-hairy sides of the tape to your face, positioning them carefully to ensure a seamless join with your real hair.

Go to the pub, prepared for intense sexual interest from humans of both genders. 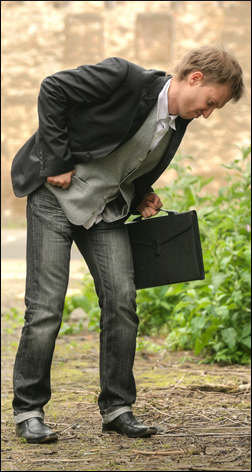 IN a bid to ensure international visitors don’t outstay their welcome, the Olympics closing ceremony will feature the fighting and vomiting aspects of the UK.

The epic event will feature a specially-constructed 23-storey Wetherspoons and 10,000 drunkards drumming along to Oops Upside Your Head before the largest synchronised vomit in history.

Volunteers will drink four litres of value-range cola and eat 2lb of asparagus on the day of the ceremony  to ensure all the seats in the stadium are coated in a pungent layer of urine, illustrating the traditional use of the UKs public places.

All other Olympic volunteers have been instructed to mug the spectators as they leave the stadium, with each mugging having a personally-tailored racial epithet based on the ticket-holder’s booking information.

The climax of the ceremony will be the dousing of the Olympic flame by Wayne Hayes, a taxi driver from Carlisle, who will light his roll-up on the flame, complain about his last gas bill, extinguish it and tell the remainder of the crowd to fuck off home.

There will also be an interactive element to proceedings as ‘townie’ pissheads in shiny short-sleeved shirts blunder through the audience, deliberately bashing into people in the hope of starting a ruckus.

Artistic director Danny Boyle said: “The powers-that-be are concerned that the overall success and good vibes during the games may have given tourists an unrealistically positive impression of the country.

“While I’m intrigued by the creative challenge of a bleak and nihilistic closing event, I baulked at their suggestion of filling the stadium with West Ham fans.

“However they insisted on having One Direction, even though I thought that was too depressing.”