If It's Alright With You, I'd Quite Like A Fridge

HERE in China, life is hard. I'm sure you've read many newspaper articles about our booming economy and burgeoning middle class, but the vast majority of Chinese still rely on subsistence farming and have no access to modern sanitation, electricity and labour saving devices.

We work in the fields for many hours, regardless of the weather, just to feed our families and keep a roof over our heads. In recent years life has started to get a little easier, but we know how quickly things can change. We are simple peasants and we are forever at the mercy of the shifting political climate.

So I have to say I do get a bit bloody pissed off when I hear that you in the West are all worried about China's economic growth and how it might increase global warming. While you're using electricity to charge your fucking toothbrush I have to shit in a hole in the ground and then cover it with bamboo leaves. Did you know that? I bet you fucking didn't.

The local Communist Party bloke popped by last week to let us know how things were going in Beijing. Oh, it's all going really well, he says. There's big plans for more roads so that we can transport more of that cheap shit we pump out of our factories that you lot in the West can't seem to get enough of.

He says that the banks in Shanghai are doing a roaring trade, what with all the foreign investment pouring into the country and buying up all the good farming land so that they can build even bigger headquarters for the sodding banks.

So then I asked him about the plans for the power station and the electricity cables that will eventually feed into our village. There's a few problems with that, he says. Might be a bit of a delay, he says. Western governments are worried about 'carbon emissions', he says – whatever the buggering toss that is.

To be honest, I just want a fridge – a little one would do – so that the goat's milk and chicken drumsticks don't go off and give us all the squits. Try having the runs in 90 degree heat when the nearest chemist is 800 miles away. Let me assure you, it's no fucking picnic.

And it's not as if I'm desperate to watch television, although that would be nice – there's only so many times you can hear the same story about the same duck. Electric lighting would be nice too. Last Monday night I got up to go for a wiz, tripped and landed in the wife's grandmother. Unpleasant? Yes it was, thanks for asking.

So while I'm landing face-first in the ancestors do please continue to use your electric whisks and your toasted sandwich makers while watching yet another fucking celebrity talent show that the BBC has ripped off from ITV and vice versa. I'll just sit here in the dark with a cork up my back passage and a dream of a bright new tomorrow.

I'm sorry, what's that? You didn't realise it was as bad as that? You understand my predicament and sympathise with my plight? To be honest, I don't really want your sypmpathy or your lectures about the cocking environment but I would quite like A FUCKING FRIDGE. If that's alright with you? 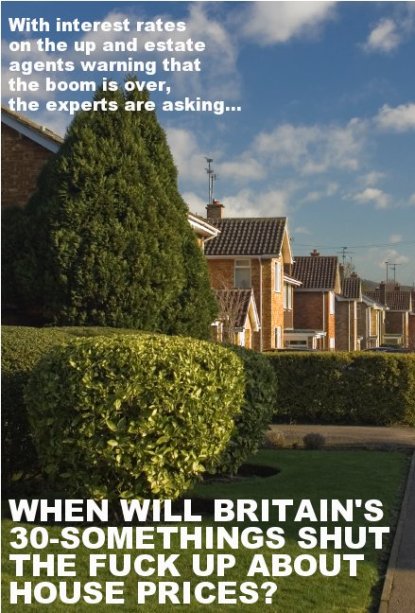